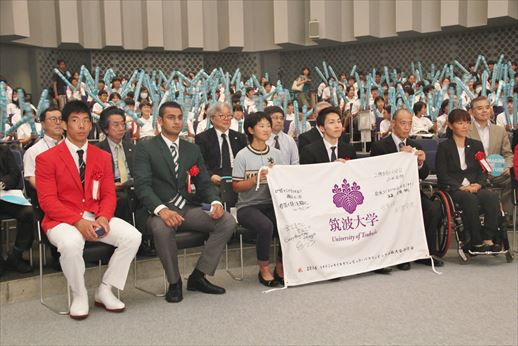 A send-off party for athletes and supporting staff of the University of Tsukuba who have been selected to represent Japan in the 2016 Rio de Janeiro Olympic and Paralympic Games was held at the University Hall on Wednesday, July 13.

Though it was a very important time to prepare for the Games, 6 out of 20 prospective athletes and 3 out of 29 supporting staff participated in the send-off party (as of July 8).

A total of 450 people including students, staff, faculty, the general public, and 160-member of seventh-grade students from Tsukuba City Kasuga Gakuen Junior and Senior High School gathered in the hall to send cheers.

The send-off party began with the performance of WINS, the university’s cheerleading club. With Associate Professor Kaori Yamaguchi of the Faculty of Health and Sport Sciences (a bronze medalist at the 1988 Summer Olympics in Seoul) serving as a chairperson, President Nagata of the University of Tsukuba first gave the athletes encouraging words: “I hope you will win the game for yourself, above all, and then, for your team, your university, and your county”. Tsukuba City Mayor Kennichi Ichihara and Provost Hisashi Sanada of the School of Health and Physical Education also gave words of encouragement.
The athletes in attendance then expressed their goals for the Rio de Janeiro Olympic and Paralympic Games.

It was followed by cheerful messages from the following people: Associate Professor Hirotaka Okada of the Faculty of Health and Sport Sciences (a bronze medalist at the 1992 Summer Olympics in Barcelona); Mr. Makoto Yazaki (a third-year student in the School of Health and Physical Education); and a seventh-grade student of the Tsukuba City Kasuga Gakuen Junior and Senior High School.

A presentation ceremony was held afterward. President Nagata presented a commemorative gift and Tsukuba City Mayor Ichihara gave a list of financial incentives for the athletes.

The send-off party was concluded with all participants singing the song, “Kirinoha”.
The University of Tsukuba expects the athletes to bring out their real strength at the Olympic and Paralympic Games. WINS performing at the send-off party The athletes singing “Kirinoha”, putting their arms around each other's shoulders Commemorative photo with the athletes and supporters