Reading the Map ? the Challenge of Understanding the Mechanics of Slope Failures and Landslides

Terrain and water sound like a strange combination, but water has a considerable effect on the shaping of the earth’s surface. In addition to the importance of rainwater and river currents, invisible subterranean water has immense power. These, in addition to soil components such as sand and clay, hold the key. Slope failures are generally known as earth avalanches. In Izu Oshima, numerous surface failures occurred, in which the layer near the surface crumbled. If there is a layer of loose sand between 1 and 2 meters under the surface with an impermeable layer beneath it, subterranean water will flow at the boundary between these two layers causing the upper section to crumble.

On the other hand, a landslide is the phenomenon of clumps of earth and sand slowly sliding down a gentle slope. A gentle slope may well have people living on it, meaning that a large scale slide can lead to a terrible disaster. Preventative measures include the extraction of subterranean water and the insertion of iron stakes to contain the soil and stop it from sliding. It is said that places in which landslides have happened and are likely to happen can be seen in relief maps. In drawing up their landslide distribution maps, the National Research Institute for Earth Science and Disaster Prevention have analyzed the topography with stereoscopic aerial photographs, identified landslide areas which bear the vestiges of previous slides, and have mapped their form and distribution. Landslides are triggered when heavy rain or snowmelt cause the level of subterranean water to rise, or when slopes are destabilized by earthquakes. 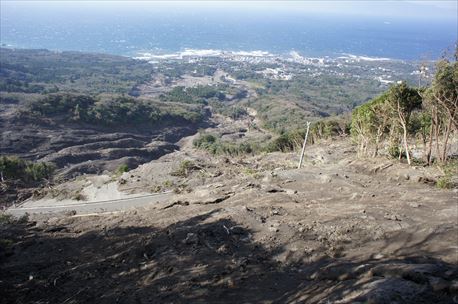 The site of the Izu Oshima landslide which was caused by heavy rain in October 2013. A residential district can be seen by the sea.

It is perhaps surprising that one can look at a map and deduce all of this; but as a further indication it is often said that place names can be a good clue. For example, the name “Ishihara” (rock field) could refer to alluvial soil which is a build-up of deposited slurries of mud and stones, in other words vast quantities of earth and stones washed along a river channel. The name could also mean a place held by tradition to be connected with heavy rain and mudslides. However, for recently developed residential neighborhoods, we are not able to tap into the knowledge of our forebears. Dr. Hattanji holding a tensiometer for measuring underground water pressure. The specimen on the table is soil from the Izu Oshima landslide site. A tensiometer buried in the soil on Izu Oshima, and data logger (the yellow box).

Large mountains can also collapse ? a famous example would be Mt. Mayuyama, part of the Unzen volcano complex in Nagasaki Prefecture. On May 21st 1792, a series of volcanic earthquakes caused the mountain to collapse and generate a landslide that swept through Shimabara City and slammed into the Ariake Sea, triggering a tsunami more than ten meters high which reached as far as Higo-Kumamoto on the other side of the bay. The landslide and tsunami killed 15,000 people, Japan's worst historical volcanic disaster, which also came to be referred to as “Shimabara Taihen, Higo Meiwaku” (Shimabara erupted, Higo affected). Mud which flowed into the sea formed the archipelago known as Kujukushima (99 islands). There are many other such “mud-flow hill” reminders of historical mudslides, around such mountains as Mt. Bandai and Mt. Asama. Dr. Hattanji (rear) carrying out a field study with one of his students in a valley in Hofu City, Yamaguchi Prefecture, the site of a landslide caused by torrential rain which affected the Chugoku/Northern Kyushu region in July 2009. A national highway located further downstream was also seriously damaged.

Dr. Hattanji has been interested in maps since he was a child. Although he does not remember it himself, at the age of five he would gaze at residential maps and try to draw maps himself. When he was in junior high school, he would look out of his window and observe approaching typhoons, and decided he wanted to become a meteorologist when he witnessed a bike shed roof being blown away. He was fascinated by his hydrology and geomorphology studies at the University of Tsukuba , and specialized in the boundary area at which the two disciplines meet. He says he was particularly interested in the formation of flowchannels. At present he is concentrating on research of surface failures and the behavior of subterranean water in places such as Izu Oshima and Kitaibaraki. Slopes always crumble eventually, but hazards can be avoided if the terrain is read carefully and knowledge of disaster prevention is utilized. Dr. Hattanji explains that he would like to continue pursuing research into the mechanisms of the dynamics of nature in order to contribute to mudslide disaster countermeasures. 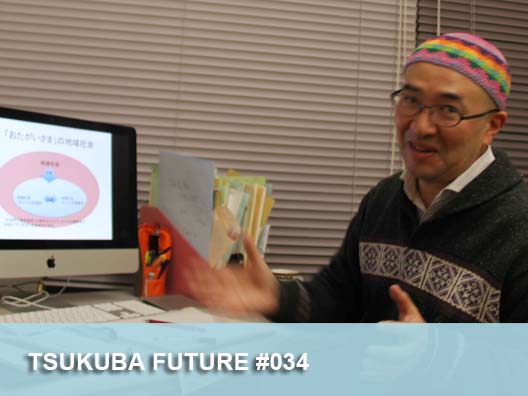