When it comes to art appreciation, some people find the subject a bit unapproachable. Meanwhile, many others may be unsure precisely what they should be appreciating, and how they should be doing so. Art, however, originally came about because it was something that people could enjoy even if they had no particular background knowledge or sense for the subject. Instead, Prof. Miyasaka uses sculpture in an attempt to express himself, trying various approaches to communicate his message with the person viewing the piece. 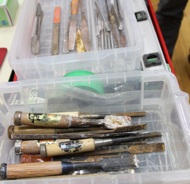 Even within the arts, sculpture is a field with an esoteric image and yet so many pieces have been produced since the time of the ancient Greeks and Romans, and also here in Japan sculpture appeared in such forms as dogu figurines, haniwa terracotta figures and large numbers of Buddhist statuary. Even children, when presented with clay, naturally use their hands to form shapes. Although we are now in an age where 3D printing has made it possible to create all kinds of shapes, that innate ability is something that will not go away—surely the desire to craft figures is something that lies at the heart of all us as humans.

The techniques involved in creating images consist of carving (in wood or stone) or modeling (by layering clay or plaster). Prof. Miyasaka specializes in modeling by means of clay, mortar or other elements. Compared to sculptures formed by chiseling little by little, he changes shape dynamically by layering in bulk. He says his enjoyment in modeling lies in the sense of speed. He is interested in people, and approaches the creation of his works from the perspective of the universality of the human form.

Greek and other types of sculpture often exhibit beautiful, symmetric expressions of the human body. Fully formed, vigorous adult figures convey vitality, and as a symbol of healthy beauty they continue to charm us even today. In a sense, then, such sculpture could be said to be an already perfected art form. However, figures showing earlier stages of life, or that show old age after a lifetime of various joys and sorrows, also show the preciousness of human life. The artist’s talent lies in absorbing and expressing life in these forms. Prof. Miyasaka believes the meaning of carrying on an art form that might be considered fully played out lies in leaving a record of the people in the age in which the artist lives.

Prof. Miyasaka’s recent works often focus on the torso, consciously rejecting treatment of the head and hands. A person’s face and hands are richly expressive, meaning that the image of the person acting as the model is strongly conveyed, drawing the eyes of the observer to those features. When an artist attempts to convey human universality, this tendency is obstructive to the purpose. By eliminating these elements, the individual appreciating the work is free to interpret as he or she feels fit. Further, Prof. Miyasaka produces figures in which he greatly hollows out the backs, along with others in which movement is suggested exclusively by a dancer’s clothing. He isn’t simply doing this to just be unconventional, rather the size of the space the observer can see that results from such techniques along with differences in texture lead to new discoveries.

Sculpture is an art form created directly by the hands. Even when tools are used in the process, the final step is to confirm the work by placing one’s hands on it. Likewise, when appreciating the work, the artist’s intent is revealed much more clearly when the work is touched. Of course, under normal circumstances it is not possible to touch objects in a museum or similar venues, but nonetheless Prof. Miyasaka makes “touchable appreciation” his research theme. This appreciation method, largely aimed at the visually impaired, is presented at exhibitions and similar events under the name “Touch Tour.”

When appreciating a work by sight alone, there is a tendency to grasp the appearance instantaneously and proceed no further. However, the ability to touch the work allows us to notice things that sight does not reveal. In Touch Tour, the artists guide those appreciating their works around the exhibition space while explaining them. By approaching artworks from all possible angles, unexpected impressions and observations are generated one after another, enhancing communication. For artists accustomed to spending most of their creative time alone in silence, it is stimulating to be able to stand in front of their work and converse directly with those appreciating it. The interaction enlivens the exhibition space and makes sculpture, which is considered largely unapproachable, easier to enjoy. It is important to offer this kind of appreciation environment to all, not just the visually impaired.

Prof. Miyasaka actively promotes opportunities for dialogue with those appreciating works of art. According to cognitive psychologist Abigail Housen, there are stages in the development of cognition of beauty, and research is being carried out into appropriate appreciation methods based on age and appreciation experience. What is common to all stages is the need to find the kinds of works one likes. It’s important to study works that are famous or highly regarded around the world, but so is studying works one likes and considering deeply why it is that one likes them. This process leads to various types of communication involving individuals appreciating a work. One is between two or more such people. Another is between the observer and the artist. Yet another type of communication takes place within the observer themselves. This is a mission imposed on art in the modern age. Prof. Miyasaka continues his pursuit of sculpture from the twin viewpoints of creating works and cultivating the appreciation experience. 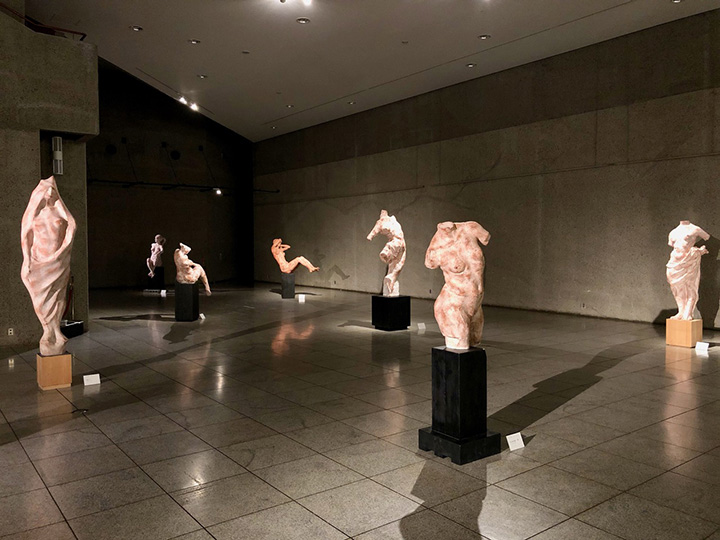 2019 Exhibition at Chiba Prefectural Museum of Art, “Sculpture Today: Shinji Miyasaka and Other Artists from the Museum Collection” 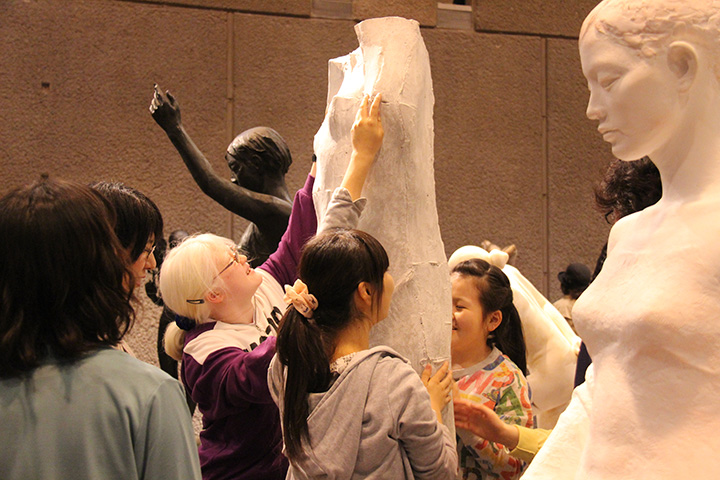 Students from the University’s Special Needs Education School for the Visually Impaired touching Prof. Miyasaka’s work on the Touch Tour 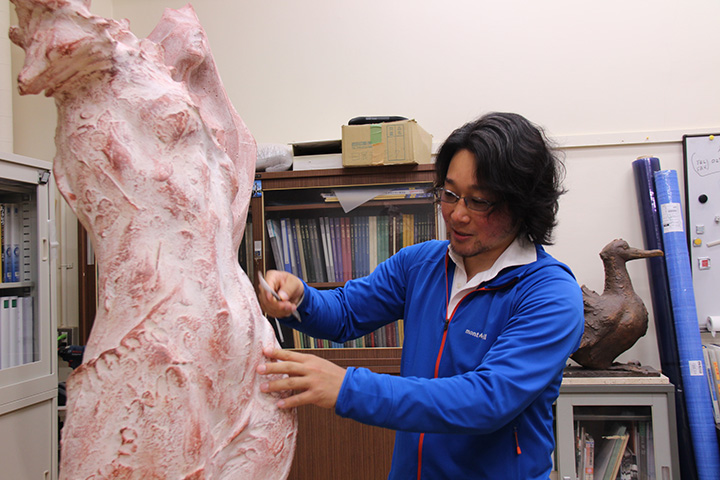 Speaking passionately about the creation of his works 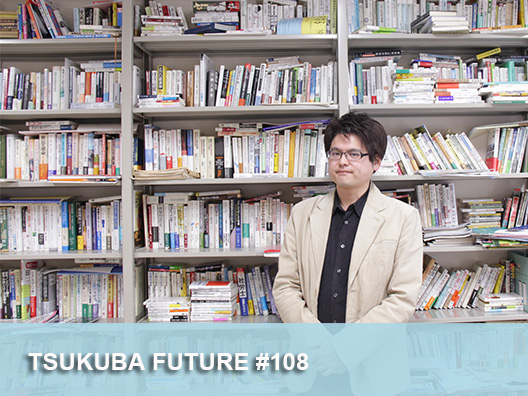 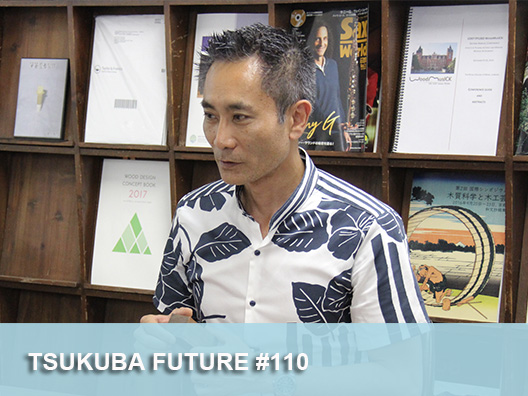