The Alliance for Research on the Mediterranean and North Africa (ARENA)

The Alliance for Research on the Mediterranean and North Africa (ARENA) was established in April 2004 at the University of Tsukuba, as an academic research center with the purpose of promoting comprehensive research concerning the North African Region through integration of humanities and sciences. Linking North Africa's unique and various potentials with Japan's advanced science and technology, our research focuses on the North African Region, from the Mediterranean area to Sahara, including Egypt, Libya, Tunisia, Algeria, Morocco and Mauritania. In April 1, 2007, we were promoted in its organizational position to an inter-departmental research institute of University of Tsukuba.

Being inspired by its institutional promotion, we intend to further implement unique and useful research activities. Currently, in cooperation with CANMRE

(Centre de l'Afrique du Nord et de la Mediterranee pour la Recherche et l'Enseignement), which was established in Tunis on April 2006 as the first overseas base of our university, we endeavor to develop a new research and education system by multi-disciplinary approach through the integration of various fields of sciences, aiming at establishing a new academic field "North African Studies."

Since its establishment, we have been performing plenty of valuable activities in the fields of Bioscience, Environment and Energy, Humanities and Social Sciences, Information and Communication Technology (ICT) and Innovation. Taking advantage of such fruitful results in each field, we have significantly contributed to further development and progress of academic activities in the Northern African countries, through conducting researches on the basis of the specific nature and unique features of the region, promoting academic exchange, supporting education and training of young researchers. These achievements could contribute to shifting the pivot of academism from Europe and America to North Africa and Asia, so that leading to the creation of a Japan-led new academic area, aiming for co-existence of different cultures.

The North African Region has its own historical and cultural background based on its geopolitical position. But this region also faces various challenges in the contemporary complicated international relations, with regard to society, economic, educational development, etc. we may help achieve more realistic and practical solutions of such emerging issues and make persistent contribution to the international society, by developing its research activities with deep comprehension and deliberation through the interdisciplinary approach and from different viewpoints of natural science and human sociology focusing on that region.

We act as a bridge linking between Japan and the North African Region, aiming to be a Center of Excellence (COE) of the future-oriented, strategic and comprehensive academic research activities.

From North Africa to the World in the 21st Century

Embedded useful bio-resources for the future
There are various gene and biological resources with infinite potential in North African Region.

Model of co-existence
North Africa is built on the unique tradition with the co-existence of various cultures.

Region of high potential with abundant intellectual human resources
North Africa has intellectual potential because of the academism inherited from the Middle Ages.

Good base-developed region for modernization
North Africa is advantageous for the promotion of the modernization due to its geographical position between Mediterranean and Africa.

Mission of Japan to open the new international academic networks
Japan is expected to lead and open new and effective international networks for academic exchanges.

North Africa is a new academic partner for Japan. 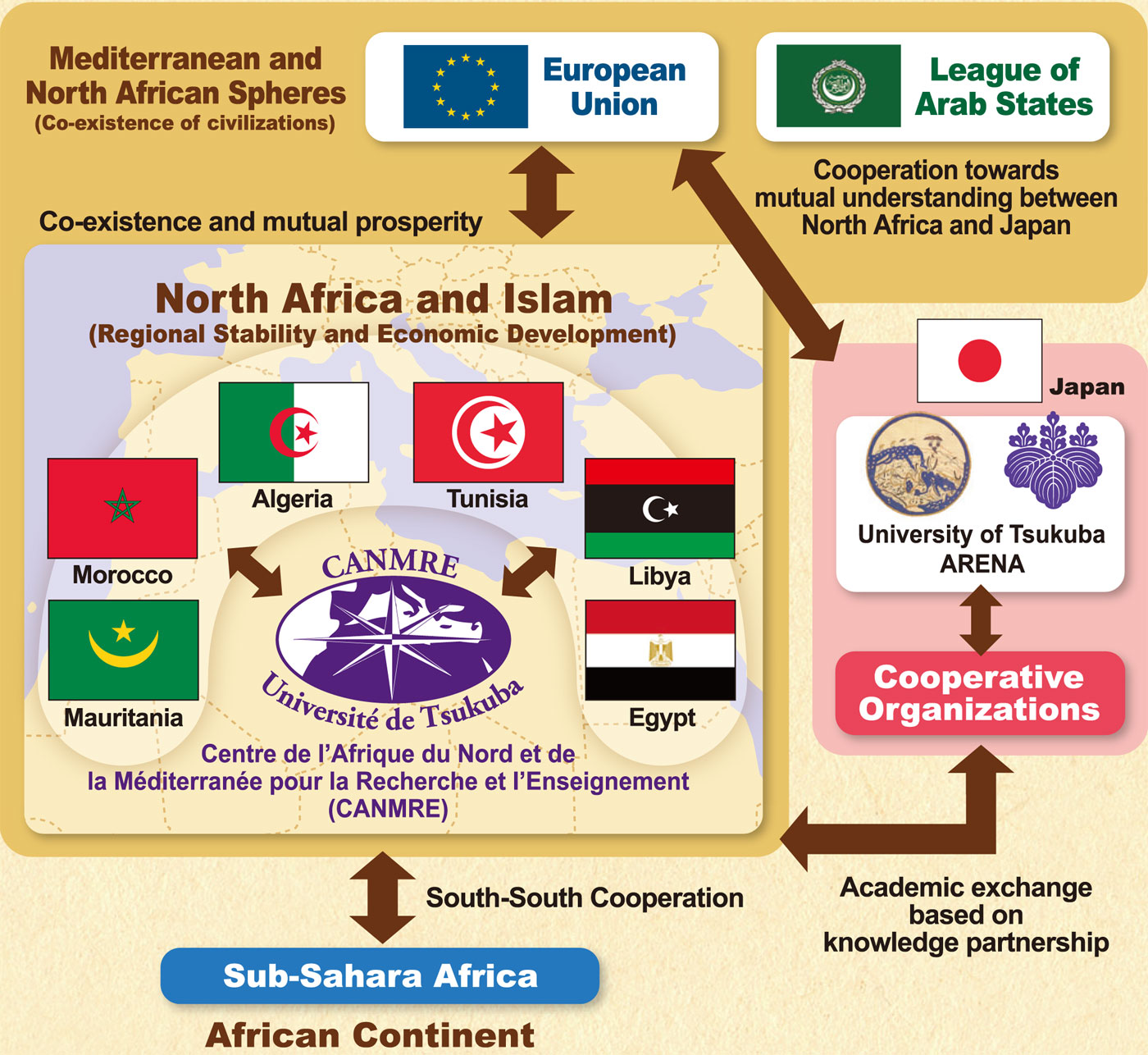 Research in the Alliance for Research on North Africa 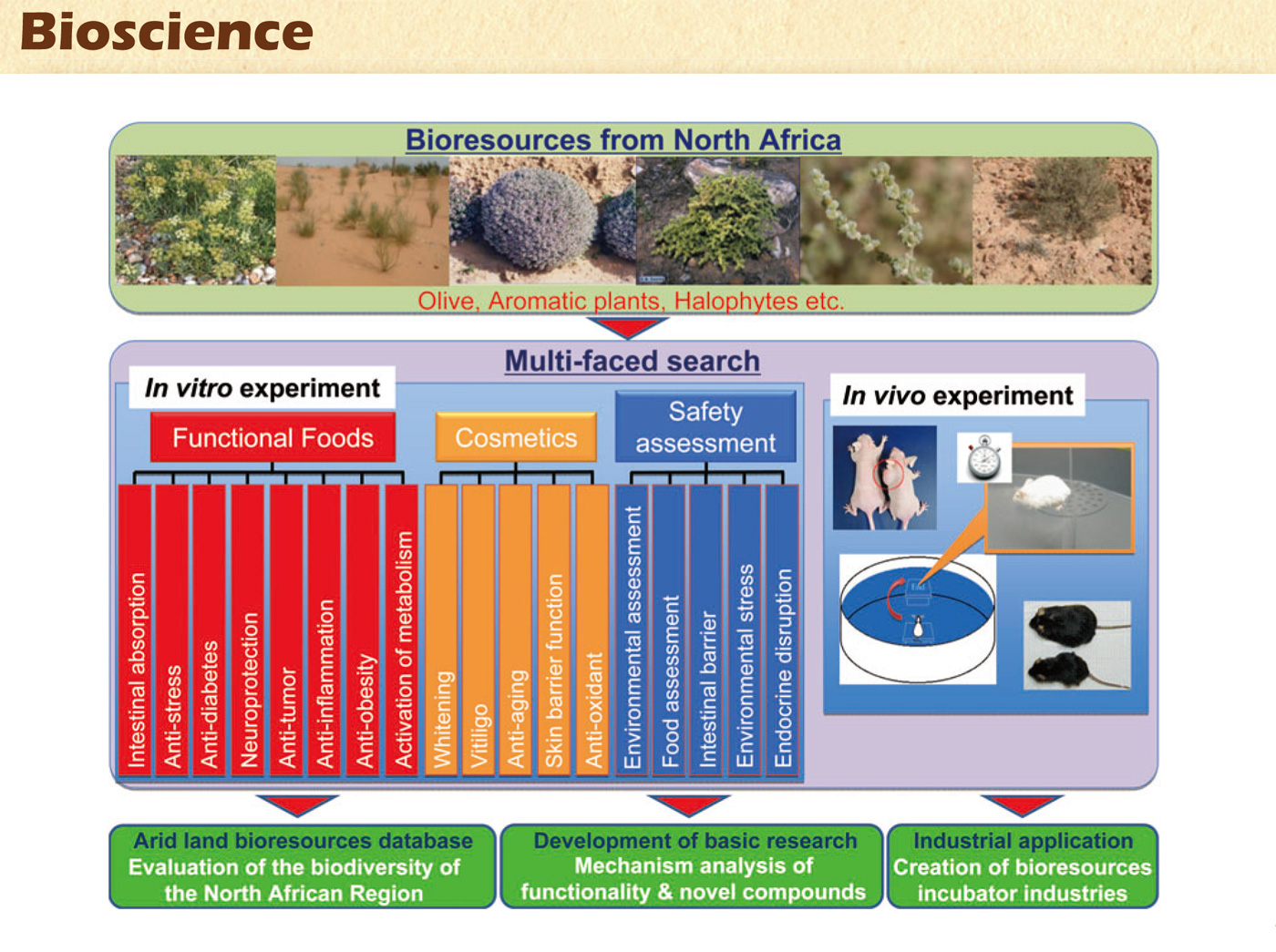 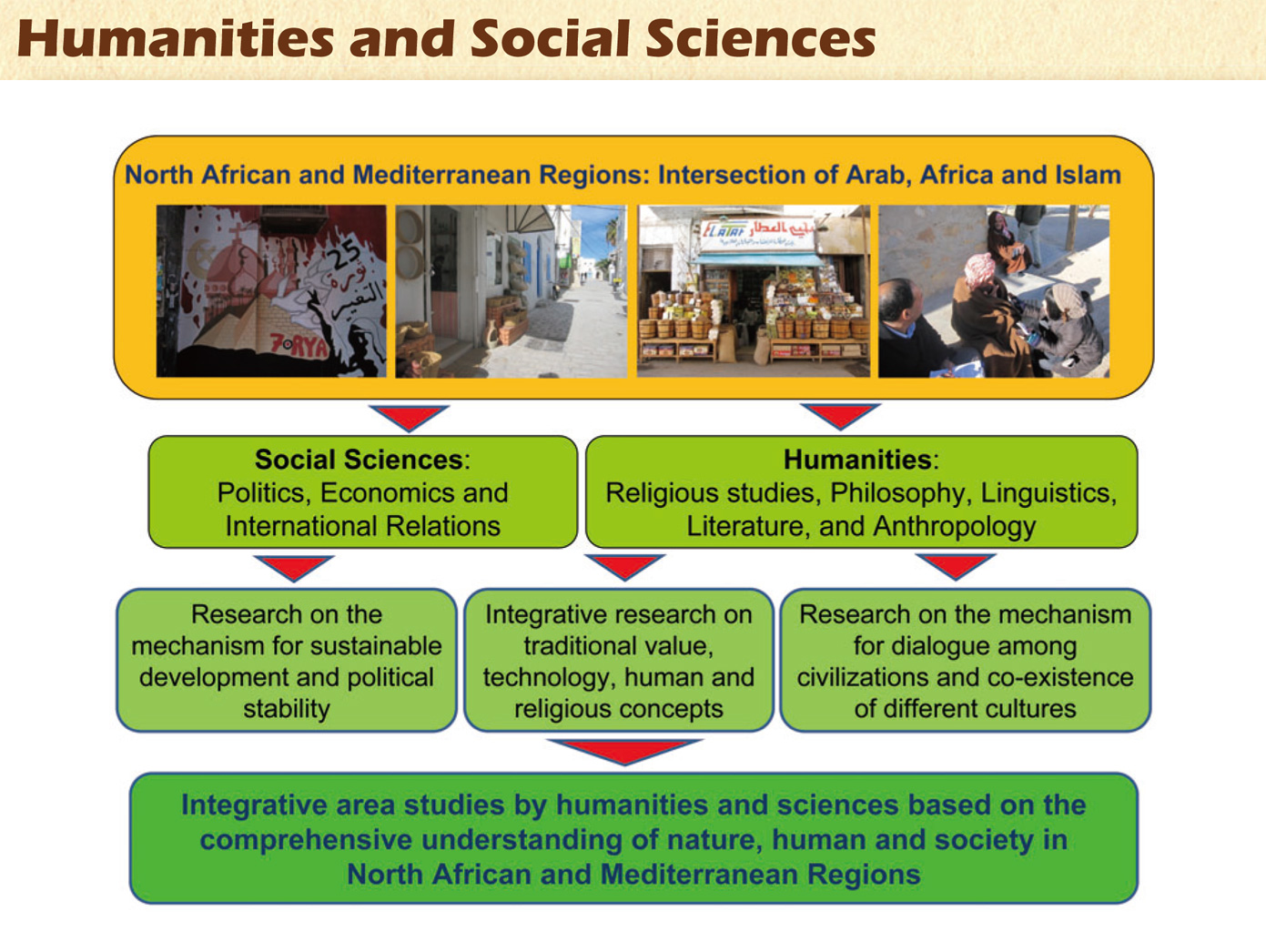 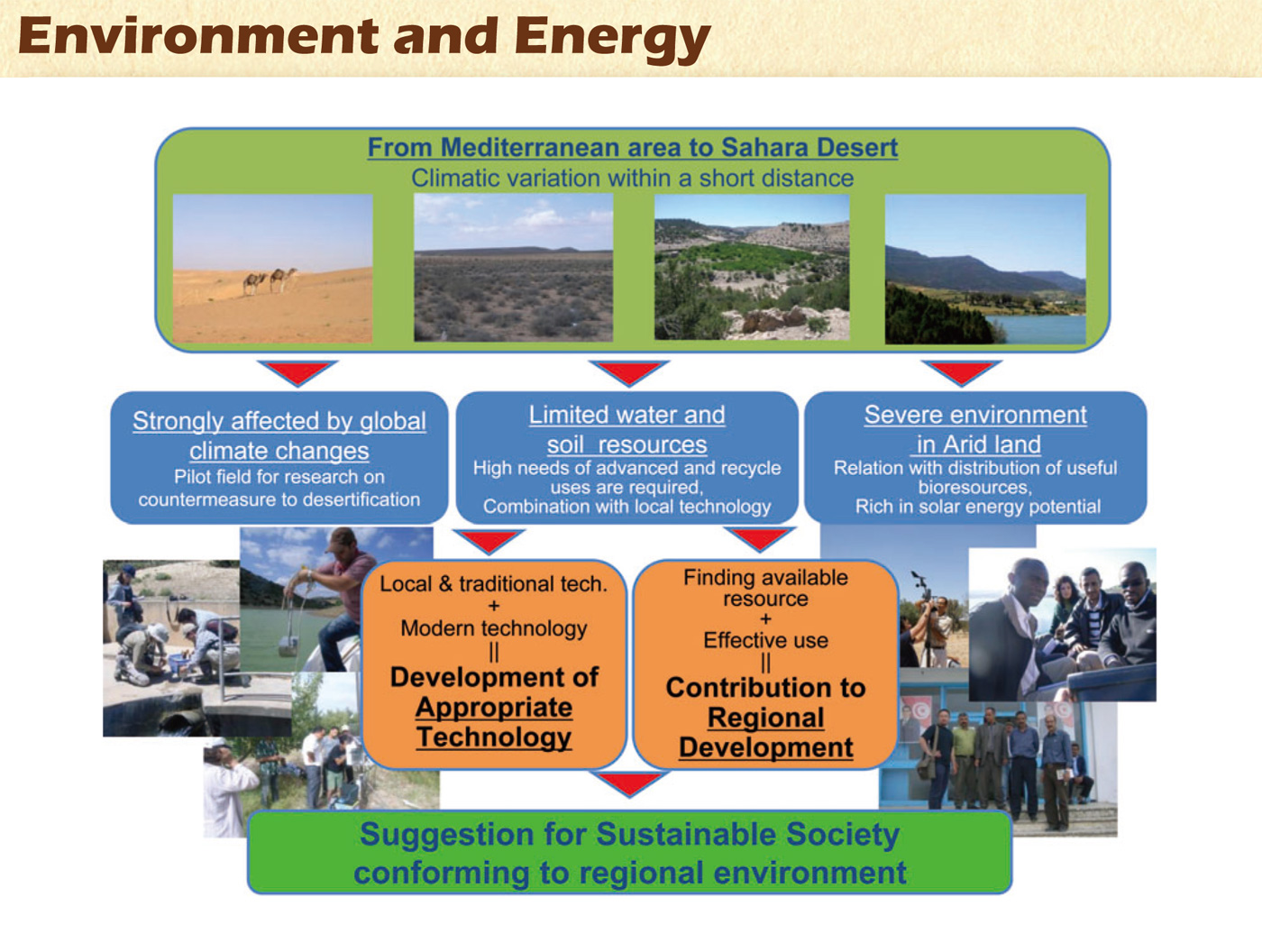 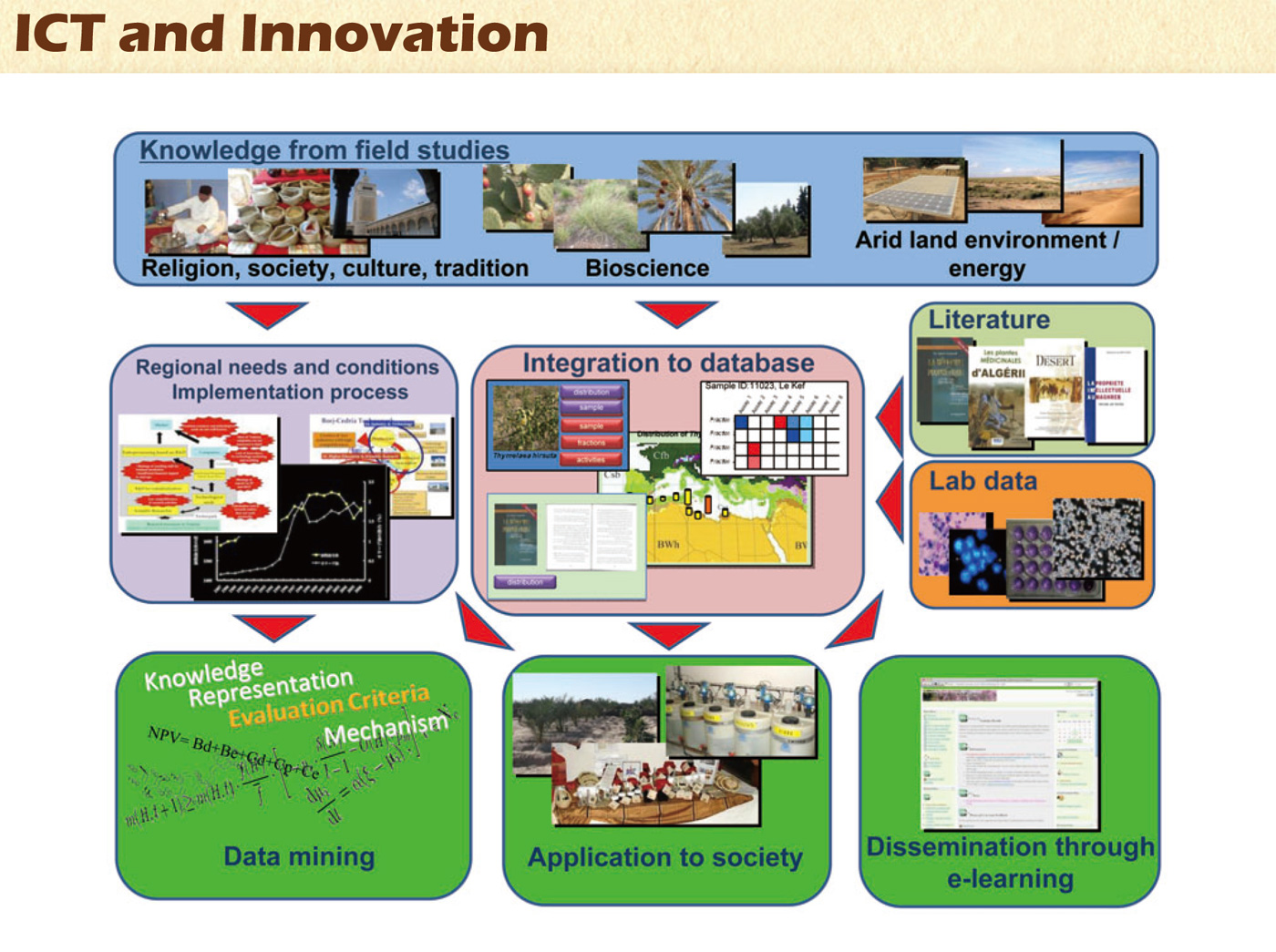 The North African and Mediterranean Centre for Research and Education (CANMRE)