Dr. Shirakawa pioneered a new field of "conductive polymers" by challenging the commonly held view that polymers do not conduct electricity. His main works can be classified into the following four.

Although polyacetylene was expected to have specific optical and electronic properties, its insolubility and infusibility obstructed the progress of research. Dr. Shirakawa found that polyacetylene thin films can be synthesized by polymerizing acetylene at the interface of concentrated Ziegler-Natta catalyst solutions. With the thin films, he clarified the molecular and solidified structures of polyacetylene.

2) Creation of metallic conductivity due to chemical doping

Using liquid crystals as solvents, Dr. Shirakawa developed a method for the production of highly conductive polyacetylene thin films consisting of uni-axially oriented fibrils of polymer chains, in parallel with the polymerization of acetylene. Furthermore, by the polymerization of acetylene in chiral nematic liquid crystals, he succeeded in the synthesis of thin films of helical polyacetylene whose chirality is controllable.

Dr. Shirakawa created self-oriented, conjugated liquid crystalline polymers by introducing liquid crystalline groups into the side chains of p-conjugated polymers such as polyacetylene. Furthermore, by macroscopically orienting the polymers with electric or magnetic fields, he succeeded in them having electric anisotropy and optical dichroizm.
For these pioneering works, Dr. Shirakawa received the Award of the Society of Polymer Science, Japan, the SPSJ Award for Outstanding Achievement in Polymer Science and Technology, and the Nobel Prize in Chemistry. Currently, the application of conductive polymers has spread widely to various new fields, such as light-emitting polymer diodes, new color screens, and polymer batteries. In the 21st century, it is expected that plastic electronics based on conductive polymers and molecular electronics built just on molecules may develop from this. 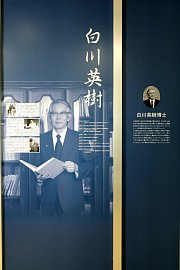