Tsukuba, Japan – Researchers may have brought the renewable energy future one step closer. A new electrode can accomplish the hydrogen evolution reaction (HER) in acidic conditions, making the technology both cheaper and more effective. The process is helped by a smart form of graphene.

The electrolysis of water to hydrogen is vital for energy storage in a green economy. One of the major obstacles, however, is the high cost of noble-metal electrodes. Cheaper non-nobles do work, but mainly in alkaline conditions, where the reaction is electricity-hungry; the more efficient acid-phase reaction requires scarce commodity metals such as platinum. Worse still, the acid electrolytes are corrosive and eat away at the core metal.

Now, researchers led by the University of Tsukuba have found that “holey” graphene offers a way round this problem. They used nitrogen-doped graphene sheets to encapsulate a nickel–molybdenum (NiMo) electrode alloy. Crucially, the graphene was punched full of nanometer-size holes, like a colander. In a study in ACS Catalysis, they showed that in acid conditions, the new HER system dramatically outperforms an electrode using regular non-holey graphene.

The use of graphene in HER electrodes is not new – this flexible, conductive carbon sheet is ideal for wrapping around the core metal. However, while protecting the metal against corrosion, graphene also suppresses its chemical activity. In the new Tsukuba system, the all-important holes promote the reaction in two ways, while the intact graphene part protects the metal.

“We created holes by decorating the NiMo surface with silica nanoparticles,” explains study co-author Kailong Hu. “Then, when we deposited the graphene layer, gaps were left behind at the nanoparticle positions – like a relief artwork. In fact, the holes are more than just gaps – they are ringed by chemically active ridges called ‘fringes’. Technically, these fringes are structural defects, but they drive the chemistry of the electrode.”

Compared with normal graphene, the fringes are more hydrophilic. This attracts hydronium (H3O+) in the acid solution, which plays a crucial role in one of the two HER mechanisms. The fringes are also excellent at adsorbing single H atoms, which provides extra surface area for the other important HER process. As a result, H2 is produced as efficiently as on a conventional (but expensive) Pt/C electrode. Meanwhile, the non-holey part of graphene delays the metal catalyst from dissolving in the acid.

“This is a versatile new concept for hydrogen evolution electrodes,” lead author Yoshikazu Ito says. “The goal is to minimize the overpotential needed for the reaction. Therefore, it’s not limited to one particular catalyst. We tuned our holey graphene layer specifically to NiMo by optimizing the size and number of holes. What’s impressive is that the catalyst was still stable in acid, despite the holes. In the future, holey graphene could be customized to a range of metals, pushing the efficiency of hydrogen production toward full-scale adoption.” 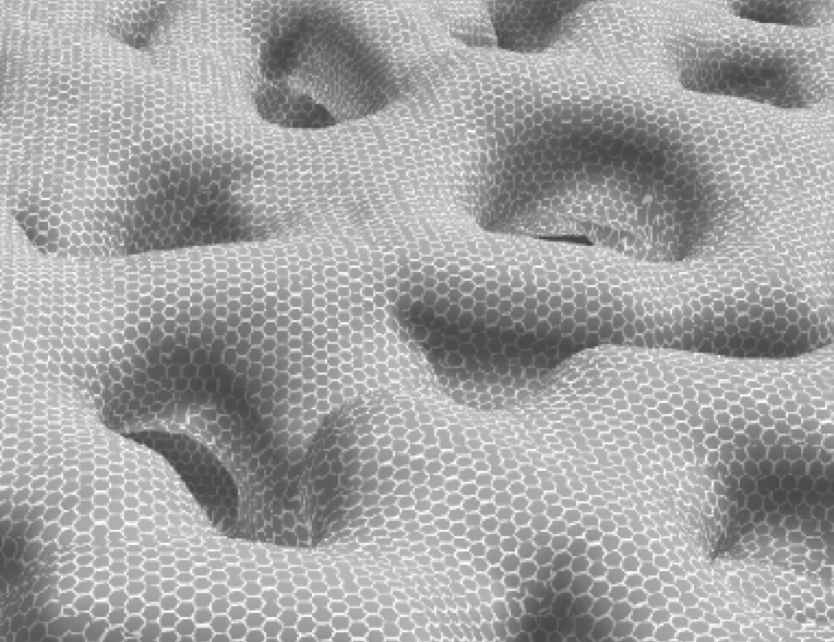 The article "Cooperation between holey graphene and NiMo alloy for hydrogen evolution in an acidic electrolyte" was published in ACS Catalysis at DOI 10.1021/acscatal.7b04091.