Tsukuba, Japan – Filamentous fungi are a group of fungi that grow by extending thread-like filaments. Some types of filamentous fungi are used in the production of drugs and foods, among other commercially useful products, while others cause disease. Understanding how these fungi grow is therefore of interest both to researchers seeking to optimize their beneficial applications, and those attempting to tackle fungal infections in humans, animals or plants.

Researchers have previously noticed that the filaments do not extend continuously, but rather grow in short bursts. However, the events within the cell that cause these bursts have remained something of a mystery. Now, an international team led by researchers at the University of Tsukuba has uncovered the molecular events leading up to these growth spurts. The report of their findings will be published in Proceedings of the National Academy of Sciences of the United States of America.

"By fluorescently labeling key elements of the intracellular signaling and transport machinery, we were able to visualize a series of steps that occurred in the run-up to each growth spurt," says lead author Norio Takeshita. "These steps inserted extra sections of membrane into the cell membrane, and thus caused the cell to elongate in bursts."

The team was already equipped with the knowledge that cellular calcium levels oscillate. In this latest study, they showed that during the low-calcium phase, chains of a protein called actin assembled. Actin forms the transport networks that guide cellular machinery around the cell to where it is needed. In this case, subcellular vesicles, which are small sacs made of the same material as the cell boundary membrane, were guided by the networks to the area of the cell where growth was to occur.

"When the calcium level then increased, the calcium peak was closely followed by disassembly of actin chains," says Dr Takeshita. "This released the vesicles, allowing them to insert into the boundary membrane and extend it, causing the burst of cell elongation."

By investigating fungi genetically modified to lack certain proteins, the team identified two membrane calcium channels that were essential for the calcium oscillations that control the elongation process.

This understanding of how filamentous fungi grow will potentially aid researchers seeking to develop antifungal agents for use clinically and in agriculture, and for optimizing biotech processes that use fungi to produce useful chemicals. The mechanisms uncovered may also be relevant to plant and animal cell growth and shape determination—because fungi have much of the same basic intracellular machinery as plant and animal cells, they can be useful as models for investigating more universal cellular processes. 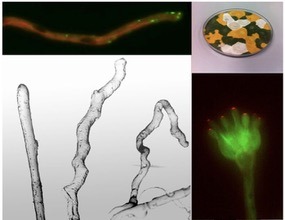