Study sheds light on how plants get their nitrogen fix

Tsukuba, Japan – Legumes are a widely consumed family of plants that serve as a significant source of dietary protein, fiber, and other essential nutrients. They obtain nitrogen through a specialized process known as nodulation, a symbiotic partnership in which soil bacteria infect the root of a plant, form bulb-like nodules, and convert nitrogen into a plant-friendly form. Understanding how nodulation is regulated may aid environmental efforts to improve legume crop efficiency and reduce the need for chemical fertilizers.

In a study published in Nature Communications, researchers at the University of Tsukuba have now identified a key genetic pathway in the legume Lotus japonicus that controls nodulation in response to nitrogen levels in the soil.

Nitrogen is an essential element for all living organisms, as it is used to make the organic building blocks of life: DNA, RNA, and protein. For legumes, obtaining (or "fixing") nitrogen via nodules comes at a cost, because the plant needs to expend energy and resources to sustain the bacteria. Owing to this tradeoff, legumes must maintain a finely tuned balance of nodulation.

"Root nodules form in response to low soil levels of fixed nitrogen molecules like nitrate," lead author Hanna Nishida explains. "When the concentration of soil nitrate increases, legumes can respond by inhibiting root nodulation. The mechanism of this response was unknown, though, so our aim was to pinpoint how nitrate-dependent regulation happens in these plants."

The research team performed a genetic screen, chemically mutating L. japonicus genes and searching for mutations that rendered nodules unresponsive to nitrate. They found a gene, which they termed nitrate unresponsive symbiosis 1 (NRSYM1), that when mutated causes the legume to continue forming new nodules even when nitrate is in the soil. In addition, they found that the same mutation disrupts nodule regulation at several other key control points—in NRSYM1-deficient plants, nitrate can no longer prevent the growth of existing nodules, stop nodules from fixing nitrogen, or prevent bacteria from infecting the roots in the first place.

Having confirmed the essential role of NRSYM1, the team set out to unearth how it carries out its numerous effects on nodulation. They determined that NRSYM1 codes for a transcription factor—a protein that, in the presence of nitrate, directly activates another gene that stops new nodules from forming. While the link between NRSYM1 and the other control points is still unclear, the researchers believe their study lays the groundwork for future discoveries.

"The control of root nodulation is a complex process likely involving multiple signaling pathways," corresponding author Takuya Suzaki notes. "Our finding that NRSYM1 is a nitrate-sensitive regulator of gene expression is important, as it opens the door to finding other genetic targets regulated by this factor. We see this as a significant step forward in understanding how legumes respond to soil nitrogen, and we’re hopeful that this will help inform breeding programs and genetic engineering efforts that aim to improve crop efficiency." 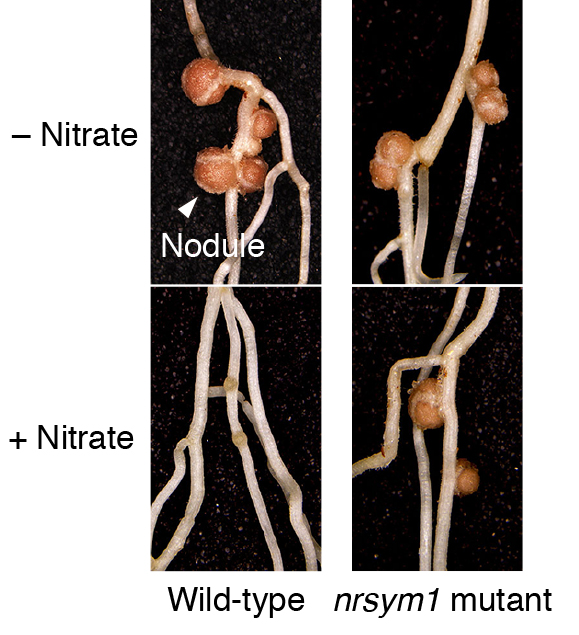 The article, "A NIN-LIKE PROTEIN mediates nitrate-induced control of root nodule symbiosis in Lotus japonicus," was published in Nature Communications at DOI: 10.1038/s41467-018-02831-x.