Gold adds the shine of reversible assembly to protein cages

Tsukuba, Japan – Protein cages—capsule-like structures made up of numerous protein molecules—perform roles in nature that have inspired their application in areas such as drug delivery. Their controlled assembly is therefore of particular research interest; however, the stimuli responsive disassembly of protein cages has not yet been reported. Now, an international research team has reported gold-directed reversible assembly of 3D protein cages. Their findings are published in Nature Research.

Reported methods for preparing protein cages based on protein-protein interactions, such as hydrogen bonding and hydrophobic interactions, can result in stable cages; however, such assemblies are static and once formed do not offer any means of smart control. In contrast, assembly that uses metal ions to facilitate interactions between proteins provides a release mechanism.

Although metal-driven assembly of proteins has been reported, examples of 3D cage structures prepared this way are rare. The researchers engineered a ring-shaped protein known as TRAP (trp RNA-binding attenuating protein) so that it exhibited equally spaced thiol groups of cysteine moieties. Adding a source of gold ions to the proteins in solution led to the assembly of 3D protein cages, based on gold-sulfur interactions, within minutes.

“By modifying the protein building blocks we have been able to direct the assembly of cages in a way that also provides us with control of their stability,” study author Kenji Iwasaki explains. “The proteins assembled within minutes of introducing gold into the system and cryo-electron microscopy allowed us to clearly see the formed structures, which have a diameter of approximately 22 nm.”

Detailed analysis of the shape of the protein cages revealed that the structures are made up of 24 rings arranged to give six square apertures. This arrangement is known as a snub cube, an Archimedean solid that the researchers believe has not previously been observed in nature.

The cage structures were shown to be stable over a range of temperatures, including at 95 °C for multiple hours, and were also found to be robust in the presence of a range of chemicals capable of disrupting hydrogen-bonded structures. However, in the presence of reducing agents, including biologically relevant anti-oxidants present in the body, the cages could be disassembled.

“The reversible control of cage stability is an exciting feature in terms of providing smart properties for dynamic cargo delivery applications,” Professor Iwasaki explains. “However, beyond these practical features, the observation of an unprecedented structural architecture that has not, to our knowledge, been observed in nature and has parallels in Islamic artwork, has provided an interesting dimension to our findings.” 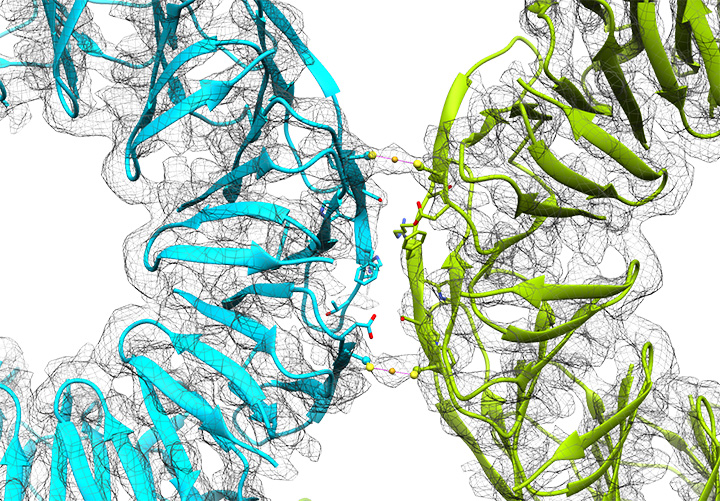