Histamine: an unexpected defender against heart and kidney damage

Tsukuba, Japan – Chronic kidney disease and heart failure are critical medical problems worldwide, and are closely associated in a phenomenon known as “cardiorenal syndrome.” The relationship between kidney dysfunction and heart dysfunction is complex. Many studies have attempted to understand this relationship; few have provided a clear target for treatment of the combined dysfunction, until now.

In a new study published in Proceedings of the National Academy of Sciences, a University of Tsukuba research team investigated the levels of histamine, an important factor in inflammation, in mice with cardiorenal damage, and found that histamine was increased in the blood of these mice, compared with normal mice.

Heart failure is a condition in which the heart cannot pump sufficient blood to meet the body’s needs, which is often demonstrated by shortness of breath, excessive fatigue, and leg swelling. Chronic kidney disease involves gradual loss of kidney function, frequently characterized by leg swelling, fatigue, vomiting, loss of appetite, and confusion. Despite many efforts to control these two disorders, treatments for both largely involve modifications of blood vessels to mitigate their effects, rather than curative approaches to reduce the underlying disease processes.

“Histamine is an important factor in various inflammatory processes, and its inhibition generally leads to better disease control,” says Akiyoshi Fukamizu, corresponding author on the study. “We found elevated levels of histamine in a mouse model of cardiorenal syndrome, which were surprisingly protective against further damage in these mice.”

In the study, mice that could not produce histamine showed worse cardiorenal damage effects, including increased heart size, altered cardiac contractility, and poor urinary filtration. Similar effects were observed when a specific histamine receptor (H3) antagonist was administered to mice with cardiorenal damage, suggesting that this receptor may serve as a useful drug target.

“We found that targeting the H3 histamine receptor with an agonist, immethridine, could markedly alleviate some components of cardiorenal damage in our mouse model,” says Dr. Fukamizu. “Additionally, immethridine treatment led to protective changes in gene expression that affected multiple genes linked to inflammation in these mice.”

In addition to their finding that histamine can control the severity of cardiorenal syndrome in a mouse model, the researchers showed that activation of a specific histamine receptor could alleviate signs of cardiorenal damage in these mice, providing a new potential treatment for patients with heart failure and patients with chronic kidney disease. 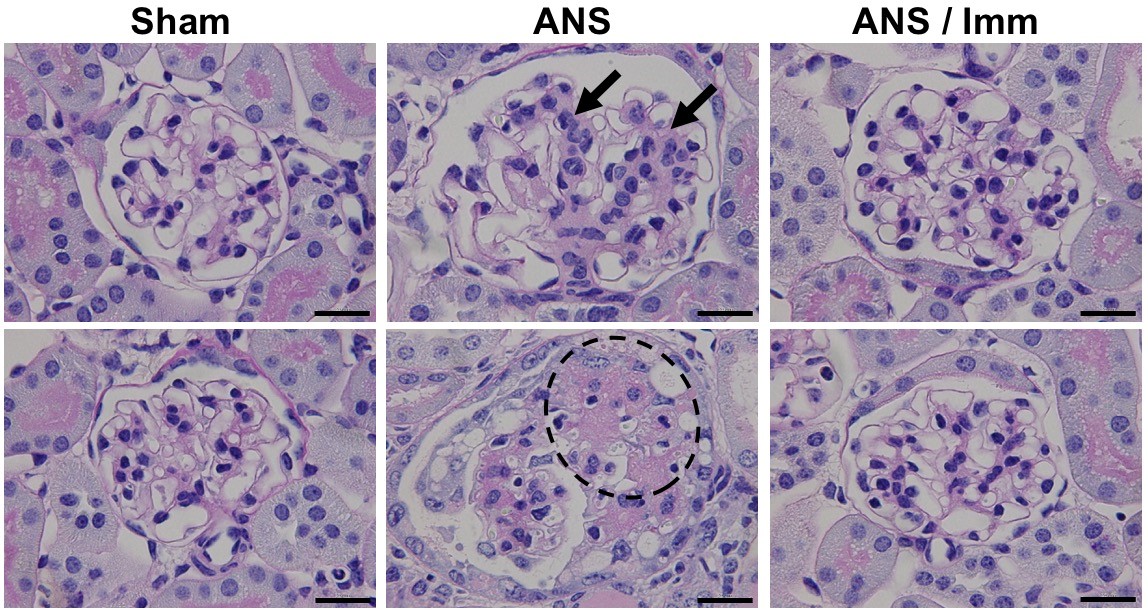