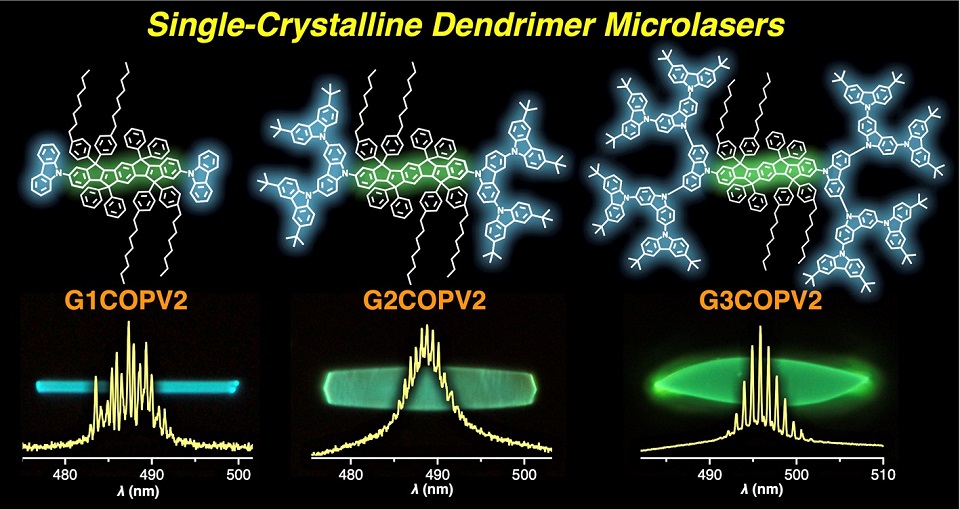 Tsukuba, Japan – The advances in optical devices that we expect as consumers must be supported by the development of new materials. Microcrystallites of luminescent organic compounds can act as tiny laser sources for such devices, for example for use in displays and other components. Dendrimers offer numerous advantages as luminescent materials, however so far they have not been used as microcrystallites owing to their fragility and poor crystallinity. Now a team of researchers has produced dendrimers that form robust crystals with lasing properties. Their findings are published in Angewandte Chemie.

Dendrimers are polymers that grow out from a core through the addition of small molecules to form extended branches—which explains their name, derived from the Greek word for tree. Dendrimers have many advantages that make them interesting luminescent materials. They are highly soluble, which makes them easy to incorporate into systems; they have high quantum yields, meaning you get a lot of the light you put in back again; they are good at harvesting light; and they tend to show relatively low luminescence loss when condensed into a solid.

The researchers made a family of dendrimers—getting larger in size as the generation number increased—made up of carbazole units forming the branches around a highly fluorescent core. The dendrimers formed stable single crystals even when the solvent was removed, and could be analyzed by single crystal X-ray analysis. In fact, the third generation dendrimer, which has a molecular weight of 4,600 Da, is the largest organic dendrimer ever to have been analyzed in this way.

“Our dendrimers have two key parts,” study corresponding author Professor Yohei Yamamoto explains. “The branches are made up of aromatic molecules that act as light harvesting antennas, collecting light made up of waves in many different planes, which is known as non-polarized light. This light is then transferred to the fluorescent core, whose structure leads to polarized light—light with waves in a single plane—being generated.”

When the dendrimer crystals were subjected to strong optical pumping—the process used to amplify the signal in laser materials—they produced amplified spontaneous emission and lasing with little damage to the structure of the material or the optical properties.

“The family of dendrimers we produced remedies a number of issues that have prevented the properties of these materials being exploited. We therefore expect them to make a significant contribution to the development of organic materials for laser optics,” says Professor Yamamoto. “The robust properties and laser emission of the crystals will be useful for components such as full-color optical displays and micro-optical circuits.”

The article, “Single-crystalline Optical Microcavities from Luminescent Dendrimers” was published in Angewandte Chemie at DOI: 10.1002/anie.202000712