Shimoda, Japan — For some, sea urchins are a pretty addition to an aquarium, while for others they are simply an ingredient in a common type of sushi. However, for developmental biologists, they represent more than 100 years of research and education. Because their eggs are transparent, embryonic development and even the act of fertilization were easily viewed with microscopes in the 1800s. Beyond the embryo, sea urchins have long lives—some species living up to 200 years—making them interesting for developmental biologists who study aging.

However, along with their long lives comes a long breeding cycle. The most studied species of sea urchin have breeding cycles between one and two years. This is a severe limitation for research that focuses on knocking out, inserting, or editing genes, which rely on quickly produced offspring. As understanding the precise function of genes has come to dominate the field of developmental biology, sea urchins have fallen out of favor as a model animal.

Professor Shunsuke Yaguchi and his team at the University of Tsukuba Shimoda Marine Research Center feel that much can still be learned from sea urchin biology and set out to find a way to reduce the length of the breeding cycle. “We examined several species of sea urchins and modified their food supply and environment,” explains Professor Yaguchi. Through these efforts, they found Temnopleurus reevesii, a species that has a breeding cycle of only half a year.

As a proof of concept study, the researchers focused on a gene that is responsible for producing the pigment that colors sea urchins. Using CRISPR technology, they knocked out a pigment gene in a natural T. reevesii mutant that has a deep magenta color. The procedure successfully produced albino mutants, but there was a catch: only male sea urchins survived. Therefore, to create first-generation mutants, the team used eggs from wild-type T. reevesii and sperm from the knockout mutants. Then they used first-generation males and females to produce second-generation mutants that lacked both copies of the pigment gene.

These sea urchins were albino and could metamorphosize into juveniles and advance into adulthood. But the survival rate was quite low. “Many of the albino sea urchin larvae from the F2 generation could not survive exposure to ultraviolet light,” says Professor Yaguchi. “This suggests that the pigment might help protect sea urchins from UV light or fix the damaged tissue.”

“Having shown that gene editing is both possible and practical in this species of sea urchin, future research can use these techniques in sea urchins to advance the field of developmental biology.” 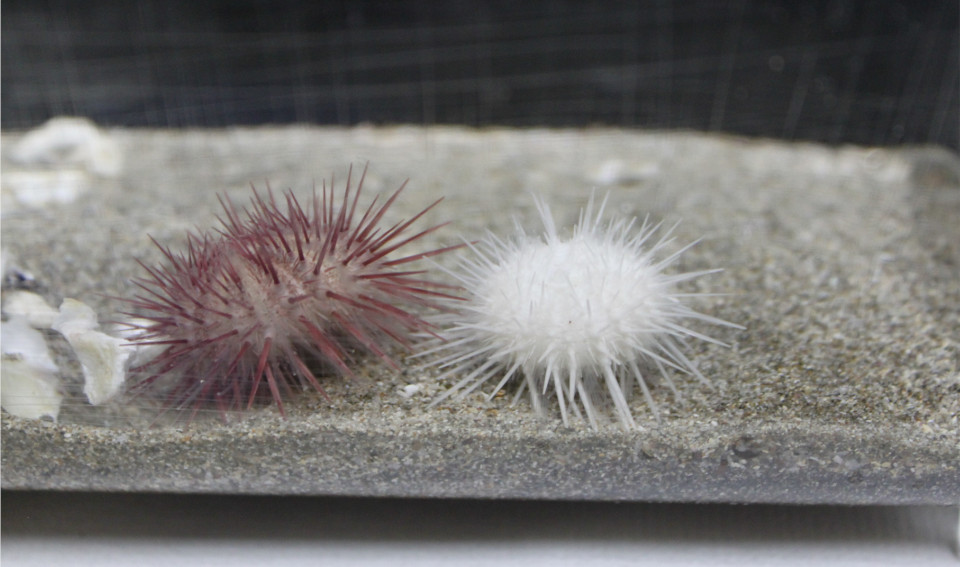 The article, “Establishment of homozygous knock-out sea urchins,” was published in the scientific journal Current Biology at DOI: 10.1016/j.cub.2020.03.057.