Protecting the Kidneys from Failing

Tsukuba, Japan—Focal segmental glomerulosclerosis (FSGS) is a common cause of steroid-resistant nephrotic syndrome, a type of kidney disease that is accompanied by massive urinary protein loss and that may progress to end-stage renal disease. In a new study, researchers from the University of Tsukuba uncovered a new protective role of the protein MafB in FSGS.

The glomeruli are the blood-filtering units of the kidneys, which ensure that only fluid from the blood and small molecules (but not larger molecules, like proteins) are excreted in the urine. Specialized cells, called podocytes, play a critical role in maintaining this filtration barrier. FSGS is a disease affecting the podocytes, and results in a thickening and functional impairment of the glomeruli that may also progress to end-stage renal disease. The protein MafB has been shown to be important for the development of podocytes, but the exact role it plays in podocyte maintenance is not well established.

“Focal segmental glomerulosclerosis is one of the most common cause of nephrotic syndrome in adults,” says corresponding author of the study Professor Satoru Takahashi. “The challenge that this disease poses is that it is often resistant to steroids, which are the conventional treatment for nephrotic syndrome. We wanted to investigate the potential role of MafB in the development and therapy of focal segmental glomerulosclerosis.”

To achieve their goal, the researchers first investigated kidney biopsies of FSGS patients and found that the amount of MafB in podocytes was significantly decreased, suggesting that MafB plays a role in the development of FSGS. To understand the molecular mechanism of MafB function in the kidneys, the researchers turned to a mouse model, in which MafB expression was specifically knocked out in podocytes. They found that these mice developed nephrotic syndrome and FSGS. By investigating the expression of almost 40,000 genes via so-called RNA-sequencing, the researchers found that MafB-deficient mice produced reduced amounts of other proteins that are known to be important for podocyte function, demonstrating a critical molecular signaling pathway that ensures proper podocyte and glomerular barrier function.

Could MafB be used as a novel therapeutic option for FSGS? To address this question, the researchers administered adriamycin, an agent known to cause FSGS, to mice that were designed to produce significantly higher levels of MafB in podocytes than normal mice. Kidney damage and nephrotic syndrome was less pronounced in mice over-producing MafB, suggesting a protective role of MafB in FSGS. The researchers then made use of all-trans retinoic acid (atRA), an agent known to increase MafB expression. When they injected atRA into adriamycin-treated normal mice, they found normal levels of MafB in podocytes and a significantly reduced extent of FSGS. To further show that atRA prevents FSGS by acting on MafB, the researchers showed that atRA failed to inhibit FSGS in mice lacking MafB. 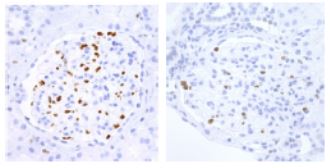 The article, “Transcription factor MafB in podocytes protects against the development of focal segmental glomerulosclerosis,” was published in Kidney International at DOI: 10.1016/j.kint.2020.02.038