Scientists at the University of Tsukuba unveil a new crystalline material that reversibly changes color from yellow to red when absorbing water, paving the way for chemically sensitive detectors that can work without electricity

Tsukuba, Japan – Researchers at the University of Tsukuba have developed a new kind of color-shifting crystalline material that can be used to indicate the presence of water. The change in hue is dramatic enough to be gauged by the unaided human eye. This work could lead to the creation of highly sensitive “vapochromic” sensors that can show if a particular gas or water vapor is present without the need for external power.

Chemical sensors are important to many industrial processes. To ensure safety and efficiency, factories often need to be monitored for potentially toxic gasses or even excess humidity. Sensors for water vapor are particularly important, but may have limited lifetimes or require external power. To address this, scientists at the University of Tsukuba have invented a new crystalline material that changes color when exposed to water vapor. Inside the crystal, long branching molecules called dendrimers are held together by van der Waals forces.

“The aromatic carbazole dendrimers containing carbon rings are anchored to a dibenzophenazine core,” explains senior author Professor Yohei Yamamoto. “Interestingly, even though van der Waals forces are usually considered to be relatively weak, the crystal stays together during operation.”

The research team also extensively characterized the new material. In addition to studying the color in both the hydrated and dehydrated states using spectroscopy, the scientists used techniques including single-crystal and powder X-ray diffraction analysis, as well as thermogravimetric analysis. On the basis of the experimental results and theoretical density functional theory calculations, they were able to determine the molecular mechanism responsible for the different appearances under different water concentrations. The color-shifting properties of the crystal come from conformation changes in the dendrimers. Upon exposure to water vapor, the planes of the outermost carbazole units in the crystal twist simultaneously. This motion changes the energies of the electronic orbitals, which causes the electrons to absorb different colors of light.

“We believe that our findings will lead to the further exploration of van der Waals porous crystals, much like metal-organic frameworks that have found a place in chemistry,” Professor Yamamoto says. “This work can lead to a new class of gas sensors that can work in difficult to reach locations, because they do not require external power.” 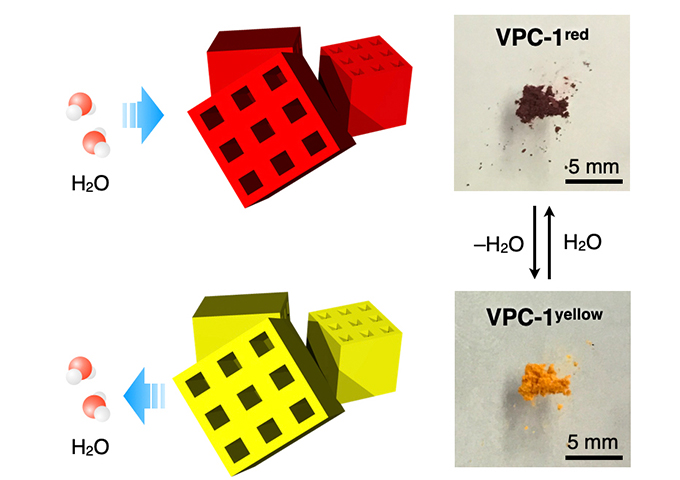