Mutant Tomato Helps to Crack the Secrets of Fruiting

Tsukuba, Japan – It may sound like something out of a science fiction B-movie, but with the help of a mutant tomato, researchers from Japan have discovered that the development process of fruit rewires their central metabolism pathway.

In a study published this month in Proceedings of the National Academy of Sciences of the United States of America (PNAS), researchers from the University of Tsukuba have revealed that “fruit set”—the fruit development process in plants—rewired the central metabolism pathway in tomatoes via an increased sensitivity to the plant hormone gibberellin.

Tomatoes, although commonly thought of as vegetables, are actually fruit. Fruit set is the process whereby plant ovaries develop into fruits after pollination and fertilization, and in tomatoes the process is triggered by gibberellin. But the role of this hormone in the metabolic processes of fruit-setting ovaries is still mostly unknown.

“Pollination is usually key to bringing on fruit set, because it stimulates the buildup of plant growth hormones, including gibberellin, inside fertilized ovaries,” says lead author of the study Professor Tohru Ariizumi. “Gibberellins stimulate aspects of plant development, such as fruit set, and trigger rapid ovary growth.”

To examine fruit set in tomatoes, the researchers used multi-omics—specifically, looking at all the RNA, proteins, and small-molecule metabolites produced during metabolism—and enzyme activity data. Additionally, they used kinetic modelling to look at the earliest processes that occur during fruit set. Ovary growth during fruit set was measured using wild-type and procera mutant tomatoes, which are hypersensitive to gibberellin.

“Applying hormones like gibberellin to ovaries or genetic mutations in the negative regulatory genes of hormone cascades can bring on parthenocarpy,” explains Professor Ariizumi. “Parthenocarpy is fruit set that is independent of pollination.”

Gibberellins are signaling molecules that trigger signal transduction cascades—i.e., they activate or repress downstream genes that are responsible for carrying out particular developmental and growth processes.

“Our study looked at the biochemical mechanisms of fruit set. Our analysis was able to define the genes, proteins, enzymes and metabolites that were consistently affected by both pollination and procera-induced parthenocarpy, and highlighted that the central metabolism was consistently rewired,” says Professor Ariizumi.

The results of this study contribute to a better understanding of fruit set metabolism, which will lead to new strategies for production. In particular, it may be possible to breed for parthenocarpic fruits (which are seedless), and to increase control of fruit survival during the early stages of development. 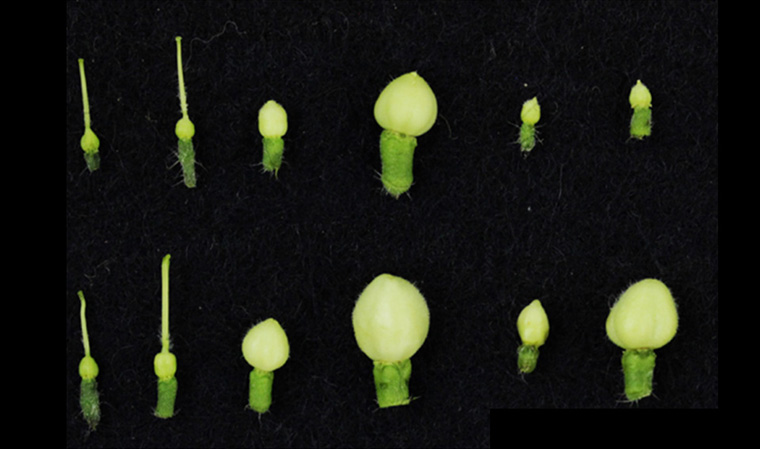 The article, “Fruit setting rewires central metabolism via gibberellin cascades,” was published in Proceedings of the National Academy of Sciences of the United States of America (PNAS) at DOI: 10.1073/pnas.2011859117