Shining a Light on Disordered and Fractal Systems

Tsukuba, Japan – Researchers led by the University of Tsukuba studied the vibrational modes of an intrinsically disordered protein to understand its anomalously strong response at low frequencies. This work may lead to improvements in our knowledge of materials that lack long-range order, which may influence industrial glass manufacturing.

Glassy materials have many surprising properties. Not quite a solid or a liquid, glasses are made of atoms that are frozen in a disordered, non-crystalline state. Over a century ago, physicist Peter Debye proposed a formula for understanding the possible vibrational modes of solids. While mostly successful, this theory does not explain the surprisingly universal vibrations that can be excited in disordered materials—like glass—by electromagnetic radiation in the terahertz range. This deviation has been seen often enough to gets its own name, the “boson peak,” but its origin remains unclear.

Now, researchers at the University of Tsukuba have conducted a series of experiments to investigate the physics behind the boson peak using the protein lysozyme.

“This protein has an intrinsically disordered and fractal structure,” first author of the study Professor Tatsuya Mori says. “We believe that it makes sense to consider the entire system as a single supramolecule.”

Fractals, which are mathematical structures that exhibit self-similarity over a wide range of scales, are common in nature. Think of trees: they appear similar whether you zoom out to look at the branches, as well as when you come close to inspect the twigs. Fractals have the surprising ability to be described by a non-integer number of dimensions. That is, an object with a fractal dimension of 1.5 is halfway between a two-dimensional and a three-dimensional object, which means that its mass increases with its size to the 1.5 power.

On the basis of the results of terahertz spectroscopy, the mass fractal dimension of the lysozyme molecules was found to be around 2.75. This value was also determined to be related to the absorption coefficient of the material.

“The findings suggest that the fractal properties originate from the self-similarity of the structure of the amino acids of the lysozyme proteins,” Professor Mori says. “This research may hold the key to resolving a long-standing puzzle regarding disordered and fractal materials, which can lead to more efficient production of glass or fractal structures.” 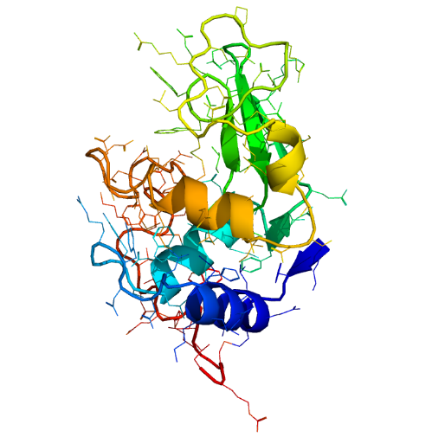 The work is published in Physical Review E as "Detection of boson peak and fractal dynamics of disordered systems using terahertz spectroscopy” (DOI:10.1103/PhysRevE.102.022502).