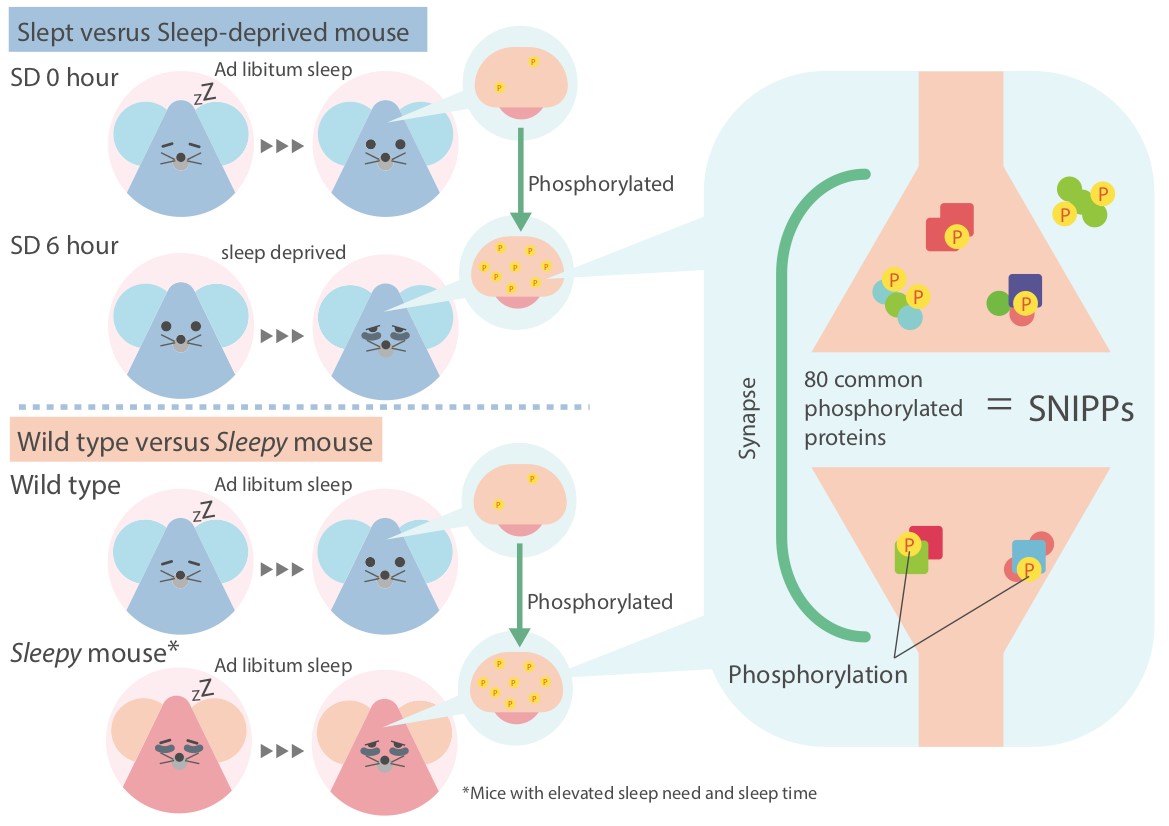 Long periods of waking can lead to cognitive impairment and sleepiness. Sleep then refreshes the brain through alterations in molecular biochemistry. These changes impact neuronal plasticity and brain function, but the molecular basis of “sleepiness” are not well understood.

Researchers centered at the International Institute for Integrative Sleep Medicine (WPI-IIIS) in Japan’s University of Tsukuba went looking for the biochemical changes underpinning this sleep–wake cycle.

A current theory of the sleep–wake cycle suggests that waking encodes memories by strengthening synapses-the communication units between neurons, whereas sleep consolidates memories and restores synaptic homeostasis by global downscaling of synaptic strength. “We suspected the molecular substrates of sleep need should be seen in all brain regions, and should accumulate gradually during waking and dissipate through sleep”, corresponding author Qinghua Liu says. Their findings, recently published in Nature, revealed that protein phosphorylation may be the key.

During normal function, cellular proteins may be modified by reversible addition of a chemical phosphoryl group, this is known as phosphorylation. The researchers used techniques for analyzing which proteins are phosphorylated and which are not. This enabled them to identify and quantify the phosphorylation of a wide range of brain proteins in sleep-deprived mice, and in mice with a single point mutation, named Sleepy, that increases both sleep time and sleep need.

“Protein functions can be switched on or off by site-specific phosphorylation, or modulated by cumulative phosphorylation of multiple sites,” lead author Zhiqiang Wang says. “So it seemed likely that phosphorylation patterns may reveal the processes underpinning sleep need.”

Immunochemical and mass spectrometry results showed increases in the number of protein phosphorylation in the whole brains of Sleepy mutant mice and sleep-deprived normal mice. Importantly, the abundance of proteins did not change and the researchers found the pattern of phosphorylation increase in Sleepy mutant mouse brains mimicked that of sleep-deprived mouse brains.

They also found a dose-dependent increase in the number of phosphorylation events in the whole-brain phosphoproteome, which tracked increasing sleep need.

By analyzing the quantity of change in phosphorylation, the researchers identified 80 proteins that are hyper-phosphorylated in both sleep-deprived and Sleepy mutant mouse brains, which they termed the Sleep-Need-Index-PhosphoProteins (SNIPPs). Importantly, the SNIPPs identified were predominantly synaptic proteins, and their phosphorylation state changed in accordance with sleep need.

“By comparing sleep-deprived mice and Sleepy mutant mice, we were able to filter out the effects of prolonged waking, prolonged sleeping and stress,” corresponding author Masashi Yanagisawa says. “Our findings show that the phosphorylation/dephosphorylation cycle of SNIPPs may be a major way that the brain regulates both synaptic homeostasis and sleep–wake homeostasis.”

The study provides evidence that prolonged wakefulness causes hyper-phosphorylation, whereas sleep promotes global dephosphorylation of the brain proteome. Given that the sleep–wake cycle impacts cognition, this research could aid in understanding sleep–wake patterns for optimal brain functions.