Pluripotent stem cells (PSCs) can transform into any type of cell in the human body. This unique property gives them enormous potential for regenerative medicine, as stem cells might eventually be used to replace tissues that are lost as a result of degenerative disorders or from injuries. Not all stem cells are created equal, though, and some are better than others at differentiating into the desired tissues. In a study published in Scientific Reports, a research group centered at the University of Tsukuba describes an improved kind of microscope that can identify PSCs most likely to undergo transformation—and therefore offer the greatest potential medical benefit.

“When stem cells are used for medical purposes, it’s incredibly important that the right type of PSCs are selected at the outset,” corresponding author Koji Hisatake explains. “Cells that have low pluripotency are not especially effective after being transplanted in a patient. Even worse, in some cases there’s a risk that they can form tumors. Our goal was to improve on earlier microscopy techniques so that we can do a better job at isolating stem cells with high pluripotency, which are more likely to be safe and effective for therapeutic use.”

Traditionally, a rigorous process is needed to weed out potentially problematic cells from the medically beneficial ones. This often involves staining cells or labeling them with special fluorescent markers—invasive processes that can damage or destroy the stem cells.

The researchers at Tsukuba took a different tack altogether. They developed a modified form of differential interference contrast (DIC) microscopy, a non-invasive approach that is commonly used to look at cells. Their new technique, coined Phase Distribution (PD) imaging by the research group, takes DIC one step further by offering higher resolution at the cellular level.

“The basic principle behind DIC is that cell structures can be visualized because they each scatter light a little bit differently,” lead investigator Ken Nishimura explains. “These differences are captured using crystal prisms that polarize light waves as they travel through the microscope. Our PD microscope works similarly, but is unique in that the prisms are actually movable. This lets us capture two separate images of the cell, at right angles from one another, and then merge the images together using a computer. The final picture has a much greater level of detail than what we’re able to get with a traditional DIC microscope. With PD, we can not only visualize but also quantifiably measure important structures inside the cell, most notably mitochondria.”

You may be wondering: why is it important to measure a stem cell’s mitochondria?

Earlier studies found that the transformative ability of PSCs is tied to how many—or really, how few—mitochondria they have. Mitochondria are the tiny, oxygen-devouring energy powerhouses of the cell, and while most cells are jam-packed with them, highly potent stem cells in fact have fewer and smaller mitochondria. The research team took advantage of this key difference, and with the help of their improved imaging system, they were able to quantify the level of mitochondria in each cell and use it as a reliable way to isolate PSCs with the greatest medical potential.

“PD imaging allows us to non-invasively identify stem cells that have been fully reprogrammed and likely have exceptional pluripotency,” Nishimura adds. “The system is less costly and time-consuming than other screening methods, so we’re hopeful that this will eventually become an important tool in the screening arsenal, especially during the critical early stages of stem cell selection.” 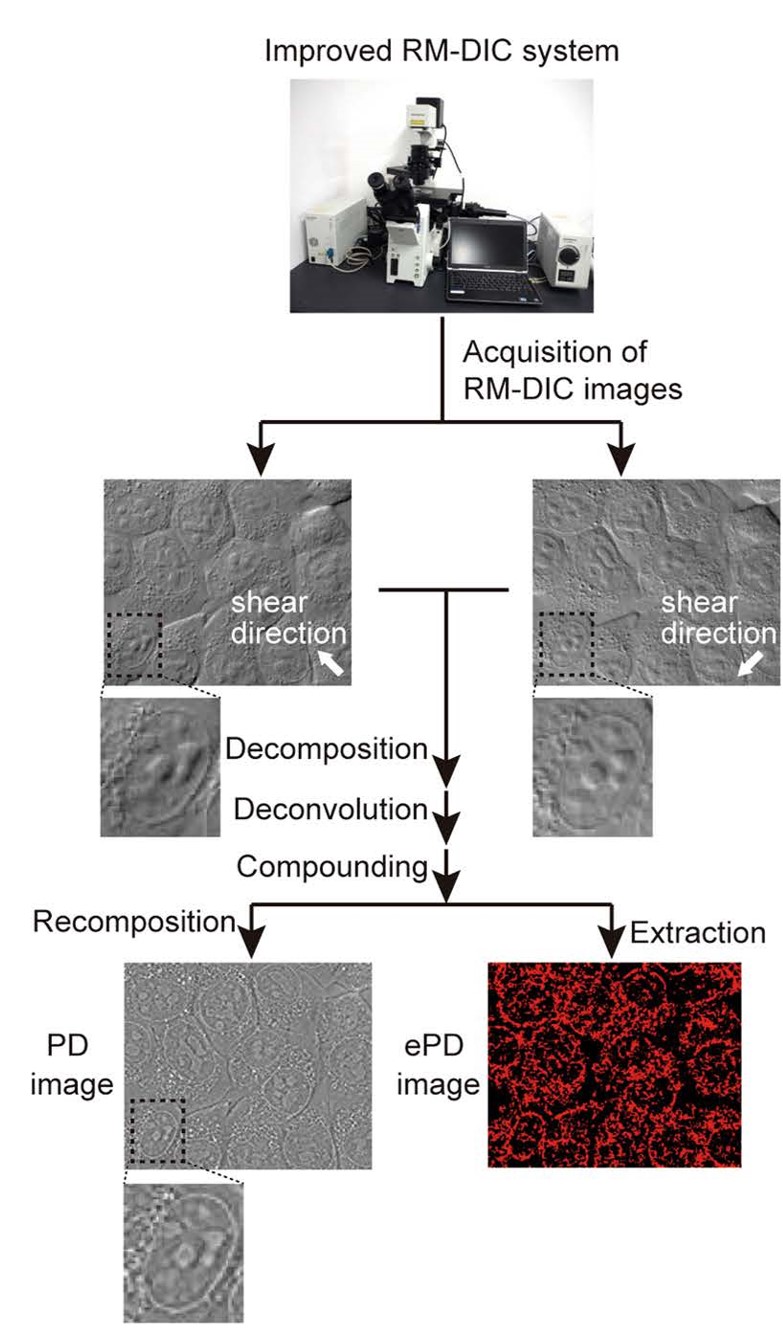 Scheme of producing a PD image and an ePD image using the PD imaging system.