Here’s something that will raise your blood pressure

Tsukuba, Japan – Many questions remain about the mechanisms that control blood pressure, particularly in relation to hypertension. Among the factors involved in regulation of blood vessel behavior, the apelin receptor (APJ) has been presumed to play an important role in the contraction of blood vessels; however, this was not verified in vivo until now.

In a new study published in The Journal of Biochemistry, a research team led by experts from the University of Tsukuba investigated the activity of APJ, a membrane receptor that is commonly expressed in cardiovascular tissue, such as blood vessels and the heart, and found that APJ was closely associated with hypertension (increased blood pressure) through effects on vascular smooth muscle cells in laboratory mice.

“Transgenic mice that overexpressed APJ in vascular smooth muscle cells showed transient and intense elevation of blood pressure due to APJ activation through apelin injection,” says Akiyoshi Fukamizu, corresponding author on the study. “This was consistent with the vasoconstriction—blood vessel contraction—present in some types of endothelial dysfunction.”

Furthermore, the researchers showed that APJ and a1A-adrenergic receptor physically interacted within cells in laboratory assays, which suggested that this direct interaction may be responsible for the vasoconstriction observed in the mice. The results of this study may help to understand the mechanisms that control blood pressure and support the development of therapies for conditions such as vascular stenosis and vasospasm. 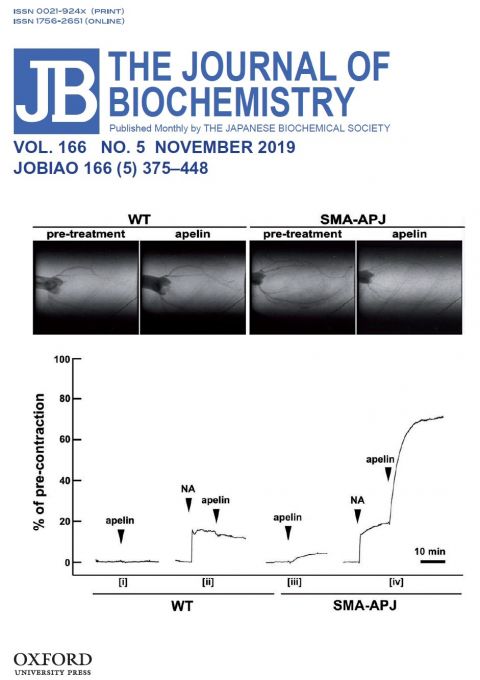 The article, "Cooperative action of APJ and a1A-adrenergic receptor in vascular smooth muscle cells induces vasoconstriction," was published in The Journal of Biochemistry at DOI:10.1093/jb/mvz071