Organellogenesis Still a Work in Progress in Novel Dinoflagellates 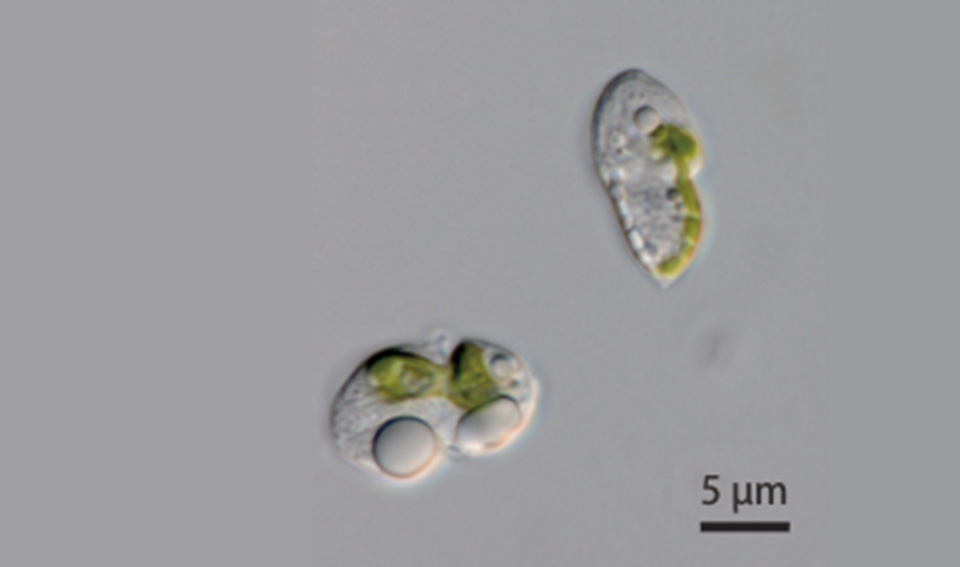 Tsukuba, Japan – Many algae and plant species contain photosynthetic membrane-bound organelles called plastids that are actually remnants of a free-living cyanobacterium. At some point in evolutionary history, a cyanobacterium was engulfed by an ancestral alga, trapping it forever as a host-controlled endosymbiont in a process called organellogenesis. All modern algae and plants are the descendants of this ancestral alga containing the first plastid. But as if by karmic intervention, some of these algae were themselves engulfed during secondary endosymbiotic events, generating what are known as complex algae.

In most cases, endosymbionts lose large portions of their genomes as well as most other cellular components except plastids during organellogenesis. However, in rare cases, the relic endosymbiont nucleus is retained within the host cell, forming a nucleomorph. While researchers know that endosymbiont genes are integrated into the host genome, there are currently only a few model systems in which to study the process of organellogenesis, meaning that it is still somewhat of a mystery.

However, in a study published last month in PNAS, researchers led by the University of Tsukuba reported an exciting discovery that may shed light on the process of organellogenesis.

The team discovered two novel dinoflagellates, strains MGD and TGD, containing nucleomorphs that were undergoing endosymbiont-host DNA transfer. In cryptophytes and chlorarachniophytes, the only other algal groups known to contain nucleomorphs, all DNA transfer events have ceased, implying that organellogenesis at the genetic level is complete. This has made it impossible to discover the closest relatives of the endosymbiotic algae or to determine how their genomes are altered during the transition process.

Even though the researchers showed that the endosymbiotic algae had already been transformed into plastids, gene sequence analysis suggested that DNA transfer from the nucleomorph to the host genome was still in progress in both MGD and TGD. Given the relatively intact state of the endosymbiont genomes, the researchers successfully identified the origins of the algae to the genus level.

“Genomic analysis of these novel dinoflagellates showed that they are both nucleomorph-containing algal strains carrying plastids derived from endosymbiotic green algae, most likely of the genus Pedinomonas,” explains Professor Inagaki.

“Based on the level of integration of the endosymbiont and host genomes in MGD and TGD, we concluded that the process of organellogenesis is less advanced in these strains than that in cryptophytes and chrorarachniophytes. This important distinction will allow us to use these organisms as models to better understand the process of organellogenesis.”

The article, “Dinoflagellates with relic endosymbiont nuclei as models for elucidating organellogenesis,” was published in Proceedings of the National Academy of Sciences of the United States of America at DOI: 10.1073/pnas.1911884117.