#032 Pursuing the Origins of Eukaryotes: Piecing Together the Puzzle of Evolution through Computational Science 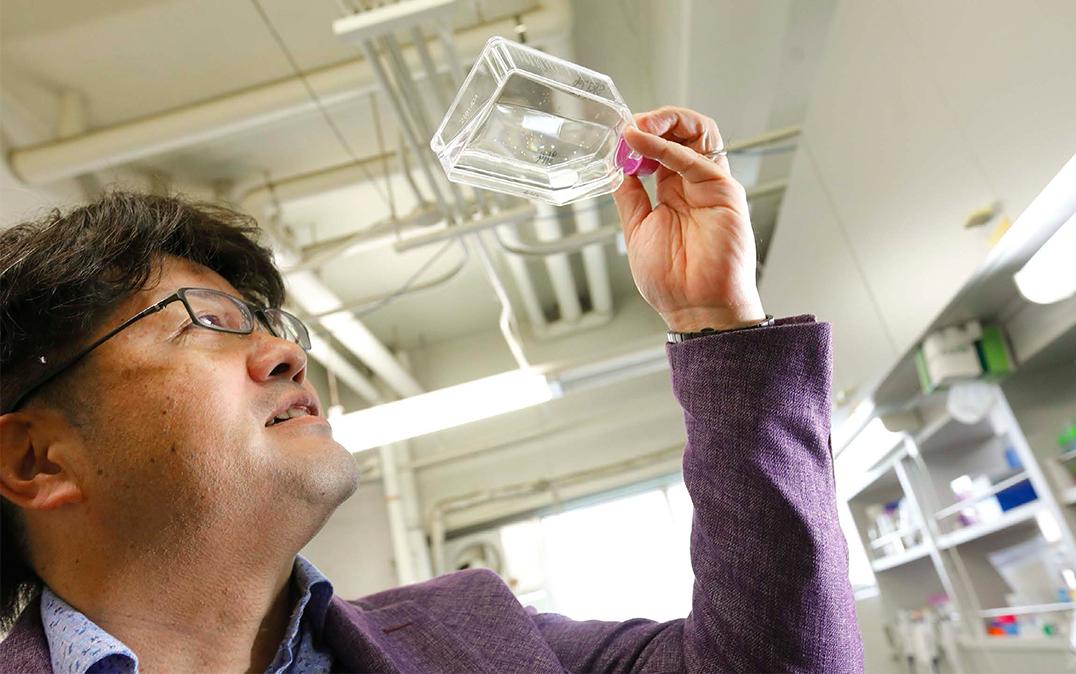 Research on the evolution of living organisms has a long history, but the techniques used have changed a great deal due to progress in science and technology. In the past, the evolutionary relatedness of organisms was determined based on appearance, but with the development of electron microscopes, relatedness came to be determined based on more microscopic structures. It has become mainstream in recent years to estimate relatedness using large amounts of data on DNA sequences together with high-performance computers for analyzing that data. Professor Inagaki is using this approach to investigate the first organisms in the phylogenetic tree of eukaryotes.

Using Computation to Investigate the Phylogenetic Trees of Organisms

The fact that human beings and monkeys are closely related to each other can be inferred from the fact that they look alike. In the same way, if DNA sequences are similar, we can regard the organisms as being closely related in lineage. Molecular phylogeny is a field which calculates the probability of a phylogenetic relationship between organisms, and investigates how sequences evolved.

The organisms on the earth have diverged from a single organism. The first organism no longer exists, and any signal within its DNA sequences has been overwritten in the process of evolution. The more ancient the organismal relationship, the less of the signal remains in DNA sequences. Even so, researchers are carrying out analysis to hunt for a faint signal of ancient relationships by using large amounts of sequence data. By proceeding in this way, we anticipate that ancient phylogenetic relationships can be reconstructed with high accuracy. It should be possible, by extending this work and tracing back the phylogenetic tree of organisms, to reach the root of the tree.

There are various subject areas in the field of evolution research. Studies on the ancestors of humankind and investigating the functions of crop genes may rather be familiar. However, what is particularly interesting is the origin of eukaryotes—organisms such as animals, plants, and fungi whose genetic material (chromosomes) is enclosed in a nucleus. Learning about the early stages of eukaryotic evolution is not useful for our daily lives, but the question of how life arose on the earth is likely to be of interest to many people.

Known organisms are only a tiny fraction of all organisms on the earth, and unclassified organisms that no one yet knows about may be an important key to understanding the evolution of organisms. Therefore, discovering new, unknown organisms is an important research activity. Accurately inferring the phylogenetic position of such organisms through large-scale data analysis gradually elucidate the overall picture of the phylogenetic tree. Nevertheless, not all of the big pieces of the puzzle have been found. Prof. Inagaki is carrying out analysis while searching for those pieces.

New species can be found even in ponds and soil on the grounds of the University of Tsukuba. In fact, a new microorganism found in the Hyotaro Pond was named "Tsukubamonas" and reported by researchers. Sampling is also conducted in places like Malaysia, where we have a partner university. New species are not only present where they have been found. They are all around, but are not easy to find. Exhaustive research has been done on organisms large enough to be visible to the eye, like plants and animals. However, microorganisms are the focus when searching for new species. Microorganisms are extracted from soil or water samples through observation under a microscope. Their gene sequences are investigated and compared with those of other organisms to identify which lineage they belong to, and more detailed investigations are carried out if an organism does not belong to any of the previously known lineages. 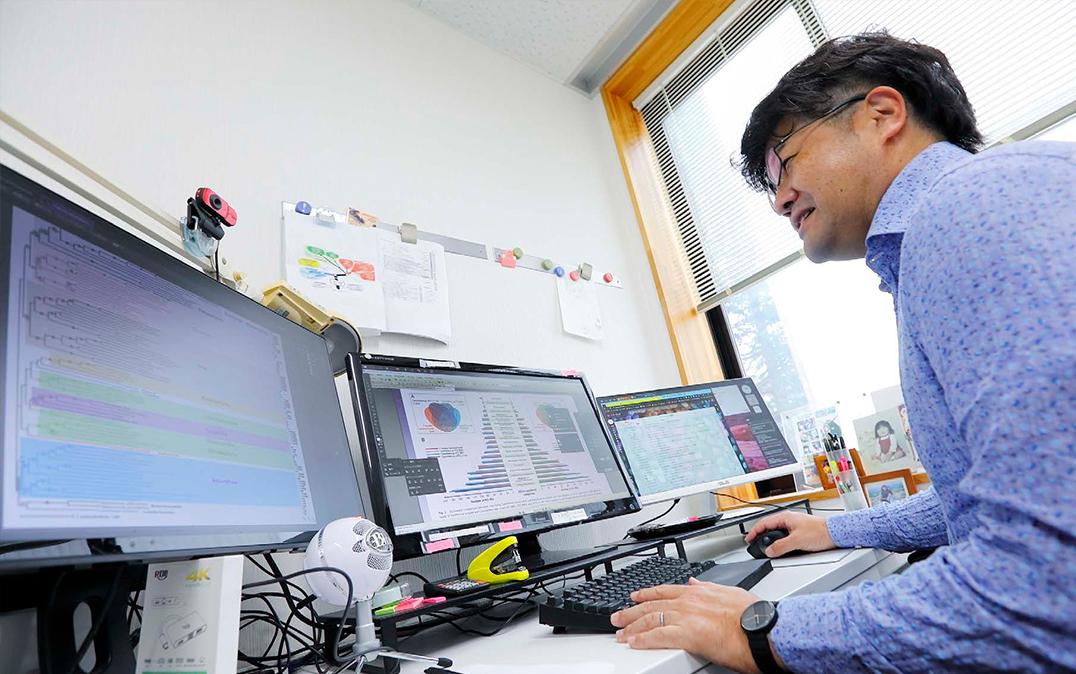 From Biology to Computational Science

Prof. Inagaki's original research topic was bacteria. This was a different area from phylogenetic trees, but his research also touched on the evolution of genetic code, and he has always had an interest in evolution. The technique of analyzing phylogenetic trees using computers was first proposed in the latter half of the 20th century, but at that time computer performance was poor and there was little data on DNA sequences. Therefore, there were limitations on what one could do. Today, however, a large amount of gene sequences have been accumulated, and high-performance computers are available, which can be easily used to understand phylogenetic relationships.

Even if one lacks deep knowledge about computers and computing techniques, an extensive range of software is available to make the job easier. The amount of computation required for phylogenetic analyses is not that great compared to fields like physics, but a single computation still takes one or two days using a supercomputer. Calculation is repeated while varying the amount of data and the conditions, so the work is quite challenging. Even so, both biology and computational science are world class at the University of Tsukuba. The opportunity for research collaboration with researchers in both areas is a major advantage for us at this university.

It's not unusual for even unicellular organisms to have genomes 100 times larger than humans. Such genomes are full of repeated sequences and sequences of uncertain meaning, and are difficult to analyze. During organismal evolution, distantly related organisms often exchange genetic materials, and it's important to clarify the origin of those sequences by comparing them against a database of genetic sequences. When a new sequence is discovered, the standard practice is to register it in a database for sharing all over the world.

Intuition Is Also an Important Quality for Making Progress in Research

Some lineage in archaea is thought to be the ancestor of eukaryotes. However, almost all of the archaea--present in tremendous numbers on the earth--have previously been overlooked and never cultured in a laboratory. Moving beyond isolating organisms from samples, a new method appeared called metagenomics where the DNA present in an environmental sample is extracted and subjected to sequencing analyses. This technique made large-scale surveys of organisms in the natural environments easy. By identifying distinctive features in short DNA sequence reads, we can now restore the genes and genomes. These techniques have shown there are many archaea completely different from those that have been previously cultured.

The ultimate goal of Prof. Inagaki's research is to determine the most primitive eukaryote. Achieving that requires not only sequence data and experimental techniques, but also good sense and intuition for deciding what to clarify with each calculation, and what information he hopes to obtain as a result. No matter how great the capacity of computers becomes, it is never efficient to compute haphazardly. The only way to develop good sense is to be interested in the subject matter. Sometimes one may overlook things outside the scope of one's own interest, but a strong desire to know is what improves intuition.

It often happens that organisms, previously believed to be related, are found to not be related by new research. This happens due to progress in analytic techniques, or to the preconditions that analysis is based on, and does not mean that past research was wrong. The appropriate attitude toward research is to conduct the best possible analysis based on current technology and knowledge, and present the most likely results at the current time. Those results may, of course, be rewritten in the future.

When there are new findings, the pieces of the puzzle of the phylogenetic tree become more refined, the size of the entire puzzle grows, and parts where pieces are missing may be found. Prof. Inagaki doesn't have many competitors researching the earliest phases of evolution, but a unique feature of this field is that more research leads to more unresolved questions. Those issues will be resolved, one by one. Until the full panorama of the phylogenetic tree is elucidated, the journey down unexplored paths will continue. 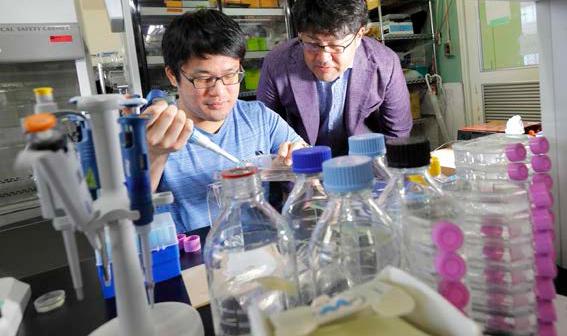 #031 From Pleasure to Decision-Making: Getting Closer to Understanding the Diverse and Complex Functions of Dopamine Neurons